The anti-China sentiment prevailing now is at its highest in the world since the Tiananmen Square crackdown on this day in 1989, the Oragniser, a weekly magazine linked to the ruling Bharatiya Janata Party's ideological mentor Rashtriya Swayamsevak Sangh, claimed citing a Chinese think-tank report. 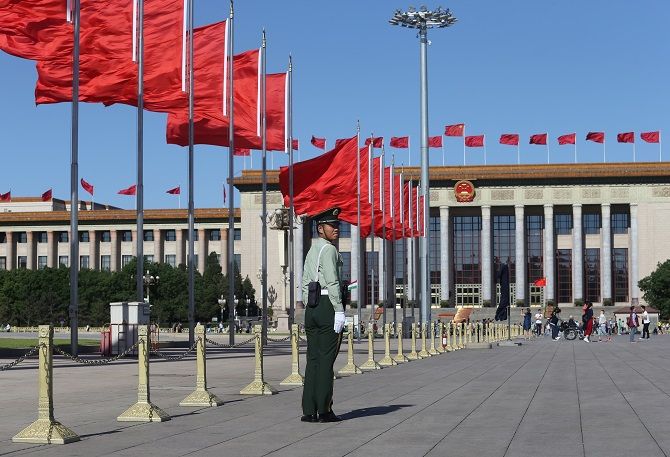 Amid a border standoff between India and China, the weekly in its latest edition recalls the Tiananmen Square event in the present context of COVID-19 crisis, unrest in Hong Kong and territorial dispute with India.

The cover page of the magazine has a famous photograph from 1989 of a lone Chinese student standing in front of a column of tanks going to break up the student protests at Tiananmen Square.

The magazine in its cover story, titled 'Revisiting Tiananmen Square', has said globally the anti-China sentiment is at its peak since 1989 students' protests.

The publication has made this claim citing an assessment report of the China Institute of Contemporary International Relations (CICIR), a think tank affiliated to the Ministry of State Security, which happens to be China's top intelligence body.

'As per the assessment report of top leadership of Chinese Communist Party (CCP), including President Xi Jinping, generated by the Institute in April 2020, global anti-China sentiment is at its highest since the 1989 Tiananmen Square crackdown,' the magazine said in its cover story.

On June 4, 1989, the Chinese army had attacked the students and protesters gathered at the Tiananmen Square in Beijing demanding democracy, freedom of press and greater accountability among others.

In an editorial in the Organiser, its editor Prafulla Ketkar writes that globally, the anti-China, or a rather anti-Maoist regime in China, sentiments are on the rise.

'China is shamelessly defending the irresponsible behaviour of hiding or perhaps spreading the COVID-19 pandemic by blaming others,' Ketkar wrote.

He further said that the muscle-flexing in the South China Sea to reassert the unfulfilled maritime aspirations, and curbing of the freedom and identity of Hong Kong are also going on at the same time.

'China is even trying to use the same high-handed approach against Bharat when we are trying to strengthen our border infrastructure, the long overdue project,' he wrote.