15 dead in UP violence; Kanpur erupts again over citizenship law

A police post was torched in Kanpur on Saturday amid fresh incidents of protests against Citizenship (Amendment) Act in Uttar Pradesh's several districts including in Rampur and Aligarh as the toll in the violence in the last two days rose to 15. IMAGE: A vehicle torched allegedly by protesters during a demonstration against the Citizenship Amendment Act in Kanpur. Photograph: PTI Photo

As many as 705 persons were arrested for committing substantive offences and 4,500 were detained across the state, IG (Law and Order) Praveen Kumar said here on Saturday.

The number of policemen injured were 263 of whom 57 received firearm injuries, he said.

Across the state, 405 empty cases of bullets were recovered from the protest sites, which "prima facie hints that how unruly elements were firing at the police. As many as 15 persons have lost their lives since Thursday, " Kumar said.

Maintaining that the police did not open fire, Director General of Police O P Singh said, "Women and children were used as shields by the protestors."

"All the deaths that took place have been in cross firing and this will become clear in postmortem examination," the DGP told reporters.

"We are clear and transparent in this. If anyone died due to our fire we will conduct a judicial inquiry and take action. But nothing happened from our side," the DGP stressed.

In Kanpur, anti-CAA protestors on Saturday set Yatimkhana police post on fire and indulged in heavy brickbatting, leading to injury to some people.

Police had to lob tear gas shells and use canes to chase them away, and fire tenders were rushed to control the flame.

ADG (Kanpur) Prem Prakash said Rapid Action Force has been called out along with 'Vajr' vehicles to control the situation.

Officials said crowds gathered in areas like Babupurva, Nai Sadak, Moolganj, Dalelpurva and Haleem College and police in large numbers was deployed to keep a watch over the situation.

Clashes broke out in Rampur between anti-CAA protesters and police on Saturday, resulting in injuries to several people, including policemen, officials said.

Around 400 to 500 people gathered here to protest against the Act amid a bandh call and five of them were taken into preventive custody, they said. 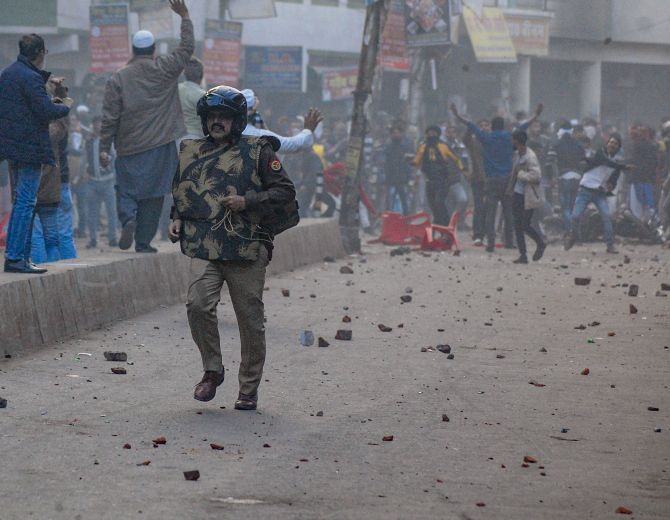 Five protesters were hospitalised and the condition of one of them was stated to be critical, District Magistrate Aunjaneya Singh said.

"Over a dozen policemen also suffered minor injuries during stone pelting by the protesters, including children aged between 12 and 18 years," he said.

The DM suspected the involvement of non-locals in the protest and said, "Police did not open fire anywhere, yet one protester had a gunshot injury."

A bandh call was given by the protesters in Rampur on Saturday even as section 144 of the CrPC, which bars assembly of people, is in force in the region and internet remains suspended.

After a lull of four days, AMU campus again witnessed protests on Saturday with hundreds of AMU non-teaching staff joining hands with AMU teachers' association, protesting against the CAA and "police atrocities" against the agitators in various parts of the state on Friday.

Police had to use mild force on Friday evening to disperse a large crowd of protestors at Shahjamal under Delhi Gate police station in Aligarh.

In the western UP district of Kasganj, internet services were suspended following tension, but police described the situation as under control.

On Friday, four deaths were reported from Meerut district, three from Firozabad and two each in Kanpur and Bijnor, and one in Sambhal. An 8-year-old boy was killed in a stampede in Varanasi when a violent mob was being chased by policemen.

On Thursday, one person was killed in Lucknow during clashes, officials said, adding so far 218 people have been arrested in the state capital.

Chief Minister Yogi Adityanath is reported to have cancelled all his programmes outside the state capital.

"None indulging in violence will be spared," Adityanath said in a tweet, asserting that every citizen will be provided security.

Officials said in view of the court directives, valuation process of the damage in incidents of clashes was going on and preparations were on to serve notices for recovery from the protestors in Lucknow.

Adityanath met Governor Anandiben Patel, who appealed to the people to maintain peace and asked them to not pay heed to rumours.

Claiming that outsiders were involved in the violence, the DGP said presence of members of political parties and of NGOs also could not be ruled out.

Bahujan Samaj Party president Mayawati, in a tweet on Saturday, asked the Centre to give up its "stubborn stand" and withdraw its decisions.