With the Pradesh Congress committees passing resolution seeking Rahul Gandhi at the helm of All India Congress Committee, party General Secretary, Jairam Ramesh on Tuesday said such measures have no binding effect. 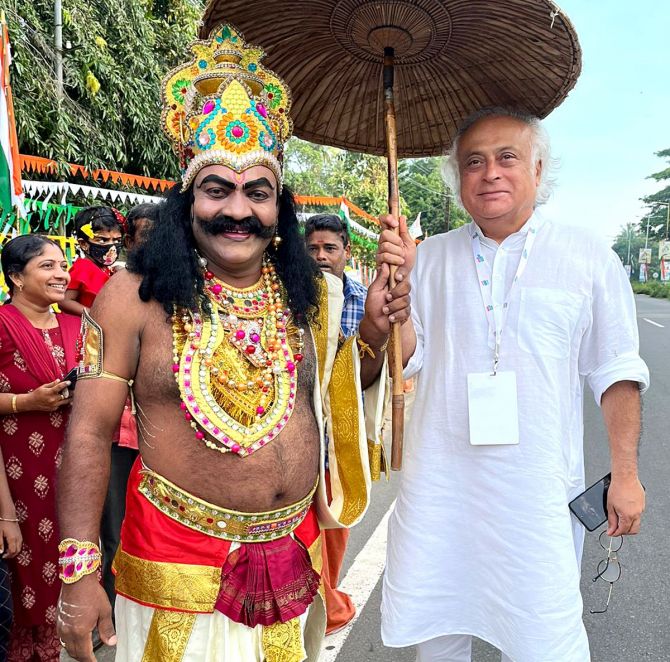 IMAGE: Congress leader Jairam Ramesh poses for a picture with a man in King Mahabali's attire during the 13th day of his party's Bharat Jodo Yatra, in Alappuzha on Tuesday. Photograph: ANI Photo

Amid indication that Congress leader Shashi Tharoor will contest in the party's presidential polls, Ramesh, also said any person could contest for the post, but he personally preferred to evolve a consensus around a candidate.

Speaking to reporters during the break time of the Bharat Jodo Yatra, he said if consensus was not possible, then the party was ready to go for an election and 9,000 PCC delegates will elect the president in a democratic manner.

Reacting to a query about seven PCCs passing resolutions asking Gandhi to be the President of the party, the former Union Minister said Congressmen are enthusiastic as they have been watching Gandhi walking for the past 13 days.

"They have been watching Gandhi walking for the past 13 days. They know the pain he is undergoing everyday. They all can relate to him. It's natural that they pass the resolution. But the resolution has no binding effect," Ramesh said.

He added that whether Gandhi will contest or not will be known between 24 and the 30th.

Ramesh said at present the focus of the Congress party was on the ongoing 'Bharat Jodo Yatra' led by Gandhi.

"However, in the election, anybody is free to contest. It is an open process. You don't need to get permission from Rahul Gandhi or Sonia Gandhi. If you have the support of 10 PCC delegates, you can file the nomination papers and the election will be held on October 17," Ramesh said.

The senior Congress leader also added that if there are no nominations and a consensus has reached on the candidate, then the new president will be announced on October 1.

"I would prefer a consensus to evolve around a candidate and if that is not possible then let's go for election. 9,000 delegates will elect the president," he said.

He said the 137-year-old party had to conduct an election to select its president only four times in the past.

The first time was in 1938 when Netaji Subhash Chandra Bose was elected.

'The entire party is immersed in making #BharatJodoYatra a success. Even so it's important to reiterate that any member is welcome to contest for Congress President. This is a democratic & transparent process. Nobody needs anybody's nod to contest, especially that of party leadership,' Ramesh earlier tweeted.

Addressing the press, he also alleged that the Communist Party of India-Marxist in Kerala was the A-Team of the BJP and accused that the Left party in Kerala was trying to make the Congress party weak and the BJP to get stronger.

The senior Congress leader said that the party may organise a similar Yatra from west to east of the country next year and also said that small yatras will be conducted in West Bengal, Odisha and Assam states through which the current Yatra was not entering.

Asked about the Congress MLAs in Goa joining the BJP, Ramesh said, "Goa is an operation washing machine where BJP goes and buys MLAs."