Pak has not kept its promise on 26/11 perpetrators: Chidambaram 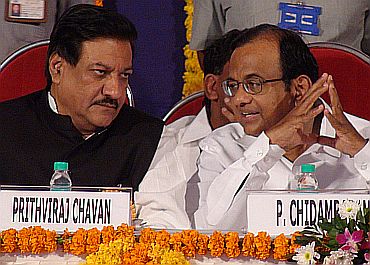 Union Home Minister P Chidambaram on Friday, the second anniversary of the 26/11 attacks, said Pakistan has not fulfilled its promise to bring the masterminds of Mumbai terror attacks to justice and hoped it will realise its responsibility as a nation and take action.

"In Pakistan, we have a neighbour who has not fulfilled its promise to bring 26/11 masterminds to justice. We have learnt a lesson that while we will always trust our neighbour, we must always be on guard," Chidambaram said on the sidelines of a function in Mumbai.

"I sincerely hope that on the second anniversary of this horrific tragedy, Pakistan will realise its responsibility as a nation, as a government and fulfill its promises to bring to justice those who perpetrated the attacks," he added. Recalling the unfulfilled assurances given by Islamabad, the home minister said that Pakistan had promised to bring to justice the masterminds, the controllers and the handlers of the terror strike by arresting all the seven persons whose names were handed over by India to it. However, it was yet to provide voice samples of the persons who had been named as perpetrators of the carnage.

"On a day like this while we honour those who laid down their lives, while we renew to our people our pledge that we will do everything in our power to secure this country and secure the people, it is my duty to caution the people that we have a neighbour who has not yet fulfilled the promises made to us," he said.

Lauding slain police inspector Tukaram Ombale, who caught the lone surviving terrorist Ajmal Amir Kasab, the home minister, said, "If Kasab hadn't been caught alive, there would be no conclusive link to Pakistan in 26/11 attacks."

Chidambaram was speaking after handing over the CNG filling station dealership to the family of Ombale in Borivli.