On 26/11, Rakesh Chawan held the master key to Taj rooms 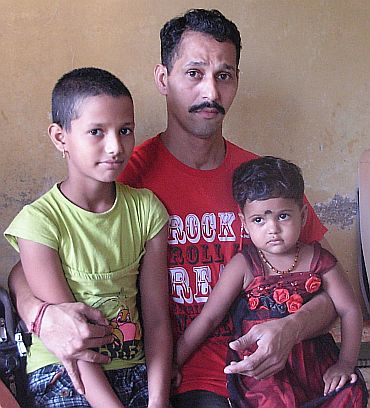 A day after terrorists besieged Mumbai on November 26, 2008, Rakesh Chawan had reported to work as private security guard from MPI agency at his posting at the Taj Mahal Hotel, one of the sites of the horrific attacks. Little did he know that a few hours later he would come face-to-face with one of the terrorists holed up inside the hotel.

On the morning of November 27, when Chawan reported to duty, he was entrusted the task of accompanying the National Security Guards commandos and open the doors of the rooms in the hotel to rescue the trapped guests.

The task served two purposes: the first being the presence of the security guard would reassure the guests to come out to safety, and second, the commandos, though adept at handling improvised weapons, were finding it difficult to open the doors with a master key.

"The handling of the master key requires certain precision, else the door would get locked and not open. As security staff I knew how to handle the master key and since I was one of the few persons who reported for work that day, I was entrusted with the task," says Chawan.

The ten-member Black Cat team started from the sixth floor of the hotel and after securing the floors, proceeded to the lower levels.

"I was only armed with a key whereas the commandos were armed to the teeth. My task was to open the door and inform the guests that we were the Mumbai police and it was safe to come out," recalls Chawan.

A couple of hours later, on the fourth floor they came to a room occupied by an elderly woman. "She was reluctant to leave her room and it took a great deal of convincing on our part to get her out. We wanted to be as discreet as possible; however, the woman created a lot of commotion -- something we desperately wanted to avoid," says Chawan.

Then they came to room number 470. Near the door was a decorative artifact, which gave very less space for Chawan to conceal himself.

He opened the door and saw a well-dressed young man standing in the doorway.

"He did not look out of place. When I urged him to come out, he did not register any emotion and stood still. He then drew a pistol from the back of his trousers and fired at the commando standing in front. I ducked but his second bullet caught me in my waist," recalls Chawan.

The bleeding security guard was immediately rushed to the Bombay Hospital. However, he did not worry about himself; what was eating him was the fact that his wife Rashmi, back at their home in Dombivli, a satellite town of Mumbai, was pregnant with their second child and she was alone at home with their elder daughter Anuskha.

Nevertheless, the most gratifying moment of his life was when Ratan Tata, chairman of the Tata Group which also owns the Taj Mahal hotel, visited him twice at Bombay Hospital.

"The first time Tata visited I was unconscious and in the ICU, but I got to meet him on the second occasion when he came to visit me in the ward," says Chawan. Two weeks later, while at the hospital, he received the news that his wife had delivered a baby girl.

Though the bullet and its residues were removed during the surgery, it caused damage to the nerves and blood vessels in its trajectory. Though he does not have any disability, he still has a limp that is not very pronounced.

What Chawan did was beyond the call of duty, as security guards are not trained to face terrorists. First of all he reported to work despite knowing that the hotel was under siege by terrorists.

A private security guard in Mumbai earns a salary of approximately Rs 4,500 per month for an eight-hour duty. If weekly holidays and overtime allowances are taken into account, the salary would be in the vicinity of Rs 7,500. Whatever it was, it was certainly not his salary that would have motivated Chawan to face terrorists.

Two years later, Chawan does not regret this decision to have agreed to lead the commando team that rescued the stranded hotel guests. The only regret he harbours is that he is not able to play cricket anymore.

"I did try playing cricket last year. However, the pain and discomfort was so severe that I did not try again," said Chawan.

He received monetary help of Rs 50,000 from the Maharashtra government and Rs 1 lakh from the Union government. Besides, the Tata Institute of Social Sciences have paid his elder daughter Anushka's school fees for the academic year 2010-11.

Two years on, Chawan still cherishes the hope that the Taj Hotel management in recognition of his services rendered during the terrorist attack would absorb him as part of their in-house security, a job which would provide him greater financial protection.

Image: Rakesh Chawan with with his two daughters at his residence in Dombivli 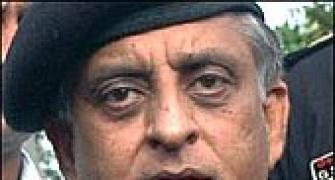 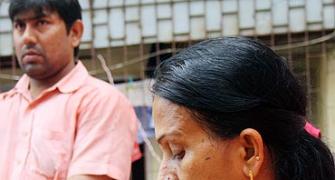 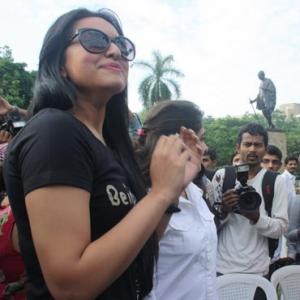 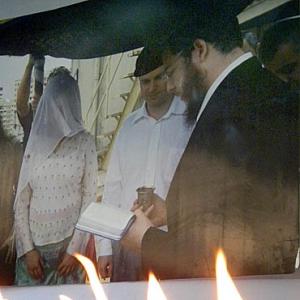