Man behind the Mumbai bloodbath 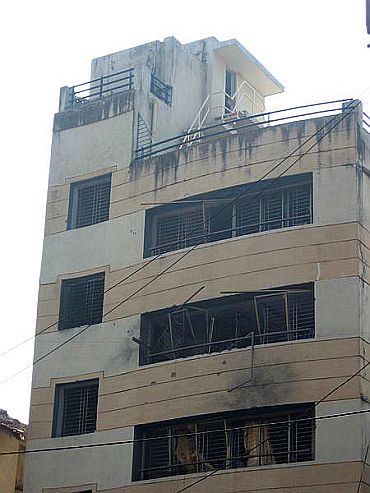 On November 26, 2008, a man sitting in a safe house in Pakistan orchestrated a bloodbath in Mumbai. The man, Sajid Mir, today personifies Lashkar-e-Taybia's evolving danger.

An investigation, carried out by ProRepublica and the Washington Post, narrates how two years since managing Lashkar's biggest strike ever, Mir and the Lashkar are at the centre of a wrenching national security dilemma confronting US President Barack Obama's administration.

Quoting American and Indian officials, ProRepublica reported that 'Mir, who joined a Lashkar unit dedicated to attacks in India in 2005, crossed the border into India, blending with Pakistani cricket fans flocking to see their national team play in India.'

'Mir's movements for 15 days in India are unknown. But Indian investigators think he was part of an operation -- spying, terrorist scouting or both -- involving a dozen Pakistani 'cricket fans' who went missing after crossing the border. Indian spy-hunters eventually caught one: a suspected ISI agent with a false identity whom they accused of espionage.'

'Later that year, Mir turned to Headley, his top American agent, who by now had completed five stints at Lashkar camps. Headley met with Mir and other Lashkar bosses who told him he had been chosen as lead scout for a big job. He went to Philadelphia in November on Mir's instructions and legally changed his name from Daood Gilani to David Coleman Headley to conceal his Pakistani origin.'

The report, quoting officials and court documents, added:  'Armed with his new identity, Headley returned to Pakistan. In July 2006, he received $25,000 for a new assignment. The money came from a man he knew only as Major Iqbal. US and Indian anti-terrorism officials suspect Major Iqbal was a serving ISI officer and a liaison to Lashkar. Major Iqbal and Mir became Headley's handlers. They instructed him to use the money to open a front company and begin reconnaissance in Mumbai that was their next target.

Mir had extensive knowledge of foreign operatives due to his close association with the Al Qaeda. He was specifically assigned to improve the transnational linkages with foreign-based jihadis with a view of undertaking global jihad.

During their interactions, Mir specifically asked Headley to concentrate on the Jewish centre in Mumbai -- Nariman (Chabad) House. Mir told him to watch and learn exactly how the Jews prayed so that he would be treated as one among them.

On 26/11, Mir directed the slaughter by phone, relaying detailed instructions to his fighters. About 10:25 pm, gunmen stormed the Chabad House. They shot the Holtzbergs and the visiting rabbis, took the Israeli grandmother and Mexican tourist hostage and barricaded themselves on an upper floor.

ProRepublica, which examined the investigation of the attacks and previous cases documenting the rise of Lashkar, also made some startling finds:

1) Mir's name has surfaced in investigations on four continents, his web reaching as far as suburban Virginia. Fleeting glimpses of him appear in case files and communications intercepts. A French court even convicted him in absentia in 2007. But he remains free and dangerous, according to Indian and US officials.

3) Legal complications in the 26/11 trial in Pakistan have raised fears among US and Indian officials that the prosecution will collapse in a court system that rarely convicts accused extremists.

4) The US investigation turned up 320 potential targets abroad -- only 20 of them in India -- including US, British and Indian embassies, government buildings, tourist sites and global financial centres.

5) Lashkar militants joined wars in Afghanistan, Bosnia and Chechnya and built global recruitment and financing networks. Those activities and Lashkar's anti-American and anti-Jewish propaganda showed an increasingly internationalist bent. Yet the US intelligence community still viewed the group as a regional player focused on India and Kashmir

6) Officials admit that counterterrorism agencies grasped the dimensions of the threat only after the Mumbai attacks.