Rajya Sabha Deputy Chairperson Harivansh invoked his humble origins in Bihar and socialist inspirations like JP and Karpoori Thakur on Tuesday, as he went on a fast citing opposition members' 'humiliating' conduct towards him, which the ruling National Democratic Alliance has made into a political issue in the poll-bound state. 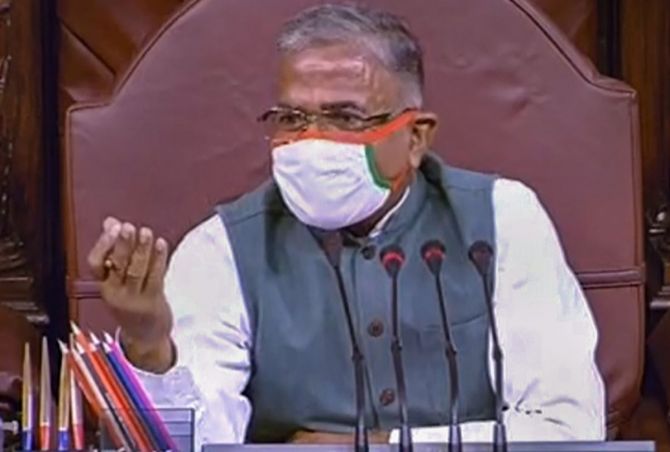 He announced his 24-hour fast in a letter to President Ram Nath Kovind and Vice President M Venkaiah Naidu, speaking at length about his anguish over the ruckus in the House during the passage of two farm bills on Sunday.

The content of his letter -- enlivened by emotions, reference to the Mahabharata and his ideological moorings -- coupled with his gesture to offer tea to opposition members accused of 'insulting' him and sitting on a dharna against their suspension, drew lavish praise from Prime Minister Narendra Modi.

Modi said his 'inspiring' and 'statesman-like' conduct will make every democracy-lover proud and his gesture to personally serve tea to those who "attacked and insulted" him showed he has been blessed with a humble mind and a big heart.

It showed his greatness, the prime minister said, urging everybody to read his letter.

However, opposition parties were quick to see a political ploy behind the entire exercise at whose centre sits Harivansh, a journalist-turned-politician and now a Janata Dal-United MP.

In a tweet, Congress MP Jairam Ramesh said the shadow of the forthcoming Bihar elections has fallen over Parliament now.

"It is all very well for Constitutional authorities to demand respect. They must, in fact, command respect by their non-partisan actions," he said in an apparent jibe at the Rajya Sabha deputy chairman.

Bihar NDA leaders, including Chief Minister Nitish Kumar and his deputy Sushil Kumar Modi, decried the 'insult' meted out to Harivansh, and said the people of the state will teach the opposition a lesson.

In his three-page letter, Harivansh expressed his deep anguish and pain and announced the fast, hoping this may inspire a feeling of 'self-purification' in opposition members.

He recounted the ruckus in the House and said the opposition members engaged in a 'violent' conduct in the name of democracy, tried to frighten the Chair, and tore to shreds every norm and convention of the House.

This sight of 'disrobing of democracy' jolted his mind and heart and he could not sleep for the whole night, the Bihar MP wrote in the letter underscoring his agony and pain at the development.

"Whatever happened in front of me on September 20 has caused unimaginable loss to the dignity of House and Chair," he said.

Eight Rajya Sabha MPs were suspended from the House on Monday for their 'misconduct' during the passage of two farm bills on Sunday.

Harivansh, who was in the Chair then, said paper missiles were thrown at him amid brazenly aggressive behaviour and raising of tasteless and unparliamentary slogans by members, a reference to several opposition MPs who created uproar in the House during passage of farm bills.

Some of them threw the rule book, tore its pages and climbed the secretary general's table as they attacked Harivansh, who was in the Chair, for going ahead with the process of the bills' passage.

Noting that the birth anniversary of 'rashtra kavi' (national poet) Ramdhari Singh Dinkar, also from Bihar, falls on Wednesday, he said he will end his fast tomorrow while citing a few lines from one of his poems.

He wrote that he was born in the same village at Saran in Bihar as anti-Emergency icon Jayaprakash Narayan and spoke about the influence of Mahatma Gandhi, Ram Manohar Lohia, Karpoori Thakur and Chandra Shekhar on him.

"I am a man of village and built by literature, sensibilities and values," he said.

People like him will come and go, but this temple of democracy, a reference to Parliament, will always be a source of inspiration, he said, adding that Rajya Sabha and the post of its deputy chairperson are important not him.

Naidu appreciated Harivansh's gesture to the MPs sitting on dharna in Parliament premises.

"Despite the sequence of unfortunate events that unfolded in Rajya Sabha recently, his gesture represents the best in India's democratic values," he said.