By Mohammed Siddique in Hyderabad
December 23, 2009 18:37 IST
Telangana supporters continued to target the Telugu film shooting for the second consecutive day on Wednesday.

A day after the shooting of a movie of Mohan Babu's son Manoj was disrupted by some workers of the Telangana Rashtra Samiti, another group of Telangana activists targeted the shooting of another Telugu film featuring Allu Arjun, son of prominent film producer Allu Arvind and nephew of Praja Rajyam Party president Chiranjeevi.

About hundred youths carrying the flags of Akhila Bharatiya Vidhyarthi Parishad surrounded the venue of the shooting of film Varudu at Ananjpoor village near Hyderabad and damaged a crane, cameras and other equipment, even as the crew and artists, including Allu Arjun, left the place in a hurry. The police later rounded up some of the intruders.

The incident occurred even as actor and producer Mohan Babu was trying to mobilise the Telugu film industry against Tuesday's attack on the shooting of his son's film.

Mohan Babu, who met the Andhra Pradesh Chief Minister K Rosaiah and director general of police Girish Kumar seeking security to the film industry, rued the lack of unity within Tollywood. He wanted the CM to give him permission for organising a peace rally in Hyderabad.

Strongly criticising other Telugu film industry leaders for remaining silent on Tuesday's incident, Mohan Babu condemned the attack on the film unit of Allu Arjun. He said that he was ready to work and fight along with Chiranjeevi for united Andhra Pradesh.

However, Allu Arvind criticised Mohan Babu for raising hue and cry over a minor incident of some people disrupting his son's film shooting. Arvind said that despite the fears of attack on shooting on Wednesday, he asked his son to go ahead with the shooting so that any untoward incident can help in highlighting the issue of security in Hyderabad.

It may be recalled here that both Mohan Babu and Chiranjeevi have adopted an anti-Telangana stand and observers say that this could be the reason for Telangana supporters targeting the films of the family members of these two leaders. 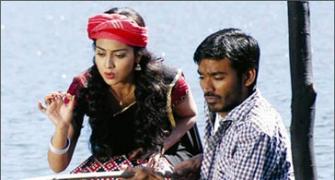 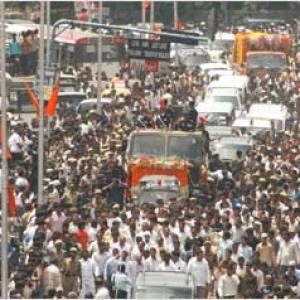