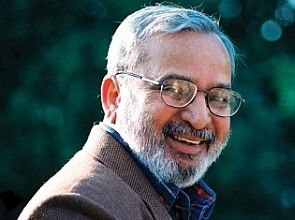 A towering figure in the world of letters, Udupi Rajagopalacharya Ananthamurthy, who passed away in Bangalore on Friday, was modern in his sensibilities and intellectual underpinnings in his literary works questioned many deeply-held beliefs.

Like his literary works, Ananthamurthy's strong political views were also striking, often landing him in unseemly situations and controversies.

A multi-faceted personality and rated as one of the best writers in the country, 82-year old Ananthamurthy has won acclaim from critics and fans alike.

In his literary life, the Kannada writer has won the Padma Bhushan in 1998, Jnanpith award in 1994, the state Rajyothsava award in 1984, while his nomination for the 2013 Man Booker International Prize brought him to the attention of a Western audience.

He was also the Vice-Chancellor of Mahatma Gandhi University in Kerala during late 1980s.

A socialist in belief, he also tried to dabble in politics contesting the Lok Sabha and Rajya elections once each unsuccessfully and courted controversies quite often with his views that generally were against BJP and Sangh Parivar.

At the height of the recent Lok Sabha poll campaign, Ananthamurthy had said he would leave the country if Narendra Modi becomes Prime Minister but later did a U-turn, saying the remark was made when he was overcome by emotion.

"That was too much to say because I can't go anywhere except India," he had said but his remarks had raised the hackles of BJP and many others who questioned his "intolerant" attitude and disrespect towards a possible popular mandate in favour of Modi.

Ananthamurthy had said if Modi comes to power it may result in a "shift in our civilisation."

Born on December 21, 1932, Ananthamurthy grew up in an orthodox Brahmin family as the grandson of a priest. His schooling began in a traditional Sanskrit school before he went to the University of Mysore and to England for a doctorate in English on a Commonwealth Scholarship.

Ananthamurthy is considered one of the pioneers of the "Navya (new) movement" in the Kannada literary world.

He burst on the literary scene in 1965 with the controversial novel Samskara that earned him the tag as a scathing critic of Brahminism, its superstitions and hypocrisies.

Samskara, meaning rituals, is Ananthamurthy's most famous literary work that depicts a Brahmin agrahara -- an exclusive orthodox settlement like the one the author himself grew up in -- confronted with an intractable conundrum. The novel was turned into a film which was considered path-breaking in ushering the parallel cinema movement in Kannada and won the national film award for the best feature film for 1970.

Ananthamurthy, whose works are rooted firmly in his cultural context and questioned established norms, published five novels, one play, eight short-story collections, three collections of poetry and eight more of essays. His works have been translated into Indian and European languages.

He married a Christian lady, Esther, and faced many problems for his inter-religious wedding. He has two children, Sharat and Anuradha.

His novels Samskara, Baraa, Avaste, Mouni and Diksha were made into movies that won critical acclaim.

Ananthamurthy had also served as the Chairman of National Book Trust India for 1992, President of the Sahitya Academy in 1993 and as a visiting professor of several Indian and foreign universities.