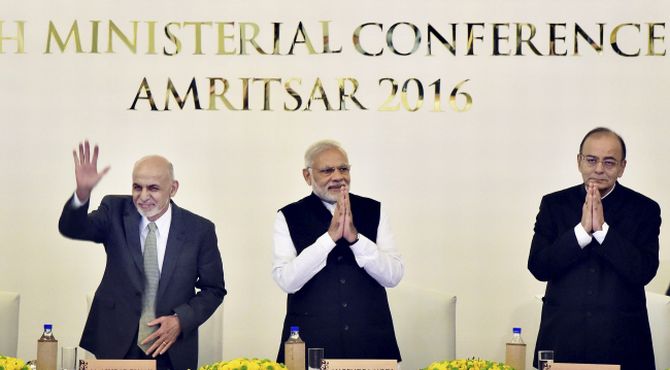 Combating terrorism was at the centre-stage of Heart of Asia conference which sent a clear message to Pakistan, holding terror and violent extremism as the biggest threat to peace, but could not firm up a regional framework proposed by Afghanistan to effectively deal with the menace.

After the two-day deliberations, attended by 40 countries including major regional and global powers and blocs, the HoA, a platform to help Afghanistan in its transition, issued the Amritsar Declaration which called for dismantling of terrorist sanctuaries and safe havens in the region, as well as disrupting all financial, tactical and logistical support for terror networks.

Held in the backdrop of number of cross-border terror attacks on India and elsewhere, the HoA expressed serious concern over gravity of the security situation in Afghanistan and in many parts of the region, holding that united efforts are required to contain terror groups like Lashkar-e-Tayyaba, Jaish-e-Mohammad, Taliban, the Haqqani Network, Al Qaida, Islamic State and its affiliates, Tahreek-e-Taliban Pakistan, Jamaat-ul-Ahrar, Jundullah and other foreign terrorist groups.

Addressing a press conference, Union Finance Minister Arun Jaitley, who headed the Indian delegation, said the declaration recognises terrorism as the biggest threat to peace and stability and demands immediate end to all forms of terrorism and all support, financing, safe havens and sanctuaries to it.

"For the first time, a Heart of Asia Declaration expressed concern at the violence caused in Afghanistan and the region by terrorist groups like Al Qaeda, Daesh, LeT and JeM etc," Jaitley said.

Apart from calling for concerted cooperation to combat the terror groups, the declaration sought early finalisation of the a draft Comprehensive Convention on International Terrorism.

It also favoured an early meeting of experts to discuss a draft Regional Counter-Terrorism Framework, recently prepared by Afghanistan, for its early finalisation.

Afghanistan had pushed hard for adoption of the framework but as many countries had not given their inputs, it could not be firmed up.

Afghan President Ashraf Ghani slammed Pakistan for providing support and safe sanctuaries to terror groups including Taliban, accusing it of engaging in an ‘undeclared war’ while many other leaders sought firm and decisive action to deal with the challenge.

Jaitley said three major issues deliberated upon at the conference were countering terrorism to create stability and security in Afghanistan, providing it with connectivity and ensure the war-ravaged country’s development.

‘We recognise that terrorism is the biggest threat to peace, stability and cooperation in our region. We encourage the international community to continue to assist the government of Afghanistan.

‘We strongly call for concerted regional and international cooperation to ensure elimination of terrorism, in all its forms and manifestations, including dismantling of terrorist sanctuaries and safe havens in the Heart of Asia region, as well as disrupting all financial, tactical and logistical support for terrorism,’ said the declaration.

In this regard, ‘we call upon all states to take action against these terrorist entities in accordance with their respective national counter terrorism policies, their international obligations and the UN Global Counter Terrorism Strategy 2006.

‘Furthermore, we encourage early finalization of the Comprehensive Convention on International Terrorism with consensus,’ said the declaration.

In an indirect reference to Pakistan, the declaration said the HoA acknowledged the support that terrorism derives in the region and demands an immediate end to all forms of terrorism, as well as all support to it, including financing of terrorism.

The declaration, which also mentioned Islamic Movement of Uzbekistan and East Turkistan Islamic Movement, said it was ‘recognising once again that terrorism, violent extremism, radicalisation, separatism, and sectarianism and linkages among them are the gravest challenges that the Heart of Asia region and the rest of the international community face’.

These problems would continue to pose a severe threat to the sovereignty, territorial integrity, economic development and bilateral and regional cooperation.

‘We renew our strong commitment to strengthening comprehensive cooperation among the Heart of Asia countries and intensify our efforts to combat terrorism in all its forms and manifestations through solidarity and collective action,’ the declaration said.

It said the countries recognised the necessity of taking serious measures to address recruitment of youths to extremist and terrorist networks and underlined the need for effective de-radicalisation and counter-radicalization strategies.

The HoA felt combating terror will not succeed without a concerted and coherent regional approach and decided to develop such a regional approach by tasking experts to meet in the first half of 2017 to identify key areas for such initiative.

The experts will give recommendation to the HoA in the first half of 2017 for further action.

Calling for dismantling nexus between revenue and its financial support for terrorist entities in the region, it said dialogue between relevant ministries and agencies of the HoA countries were necessary to tackle the menace.

The conference was attended by delegations from practically every participating country, supporting countries and international organisations -- 45 in all.

The delegations of Afghanistan, India, Iran, Kyrgyz Republic, Pakistan, Turkey and Turkmenistan, and of the European Union were led by the respective Ministers.

The Conference also saw the presence and participation of guest countries Austria, Bulgaria, Latvia and Uzbekistan.

Jaitley said the discussions and the declaration reiterated the strong support from the Heart of Asia countries for Afghanistan’s efforts to use its geographic location to enhance wider regional economic cooperation.

Specific initiatives in this regard including the India-Iran-Afghanistan Trilateral Agreement on developing Chabahar were acknowledged.

He said during the Conference various delegations expressed appreciation for the constructive role that India has been playing in supporting Afghanistan and its people in the past decade-and-a-half.