The Modi government has a zero-tolerance policy towards terror, and while the situation has improved a lot in Jammu and Kashmir, 'we should not be satisfied till total peace is achieved', Union Home Minister Amit Shah said on Monday. Shah, who extended his three-day visit to Jammu and Kashmir, stayed for the night at the Central Reserve Police Force (CRPF) Campus in Lethpora in Pulwama where a suicide car bomb attack by Pakistan-sponsored terrorists in February 2019 had left 40 paramilitary personnel dead.

"I want to spend one night with you people and understand your problems," Shah said addressing the security personnel at the CRPF campus, adding it was his 'most important' engagement during his visit to the Union territory.

Shah said that the law and order situation has improved a lot in Jammu and Kashmir, adding that he was hopeful 'we will be able to realise a peaceful Jammu and Kashmir as envisaged by Prime Minister Modi during our lifetime'.

"Stone-pelting incidents are only seen when we try to look for them. There was a time when stone pelting was common in Kashmir. Such incidents have decreased to a huge extent. But, I want to say that there is no need to be satisfied," Shah said.

"Narendra Modi government has a zero-tolerance policy towards terrorism. We cannot bear it. It is against humanity. It should be our priority to save the people of Kashmir from the persons who are linked to this heinous crime against humanity," he said.

The home minister expressed his gratitude to the CRPF and other security forces for ensuring that there was no bloodshed after Article 370 was revoked in August 2019. "There are many changes that are happening on the development front, in infrastructure, industrial and education sectors because the Army and CRPF are ensuring that all sinister designs are defeated," Shah said.

He said when Articles 370 and 35A were revoked, there were many apprehensions that 'there would be a huge reaction'.

"It was possible as well, that perhaps there could have been bloodshed, but today I have come here to tell you and tell you freely that because of your alertness not a single shot was fired. It is a huge thing for us.

"The alertness with which 28,000 jawans and also J-K policemen worked after a major decision was taken in national and J-K's interest, no blood was shed and a new era of development was started in Kashmir,"' he said.

Its effect is visible in the fact that the Pulwama which was known across the country and the world over for the terror attack on CRPF will now have a medical college to be built at the cost of Rs 2,000 crore, he said.

However, he asked why should even 30 civilians lose their lives to terror incidents. 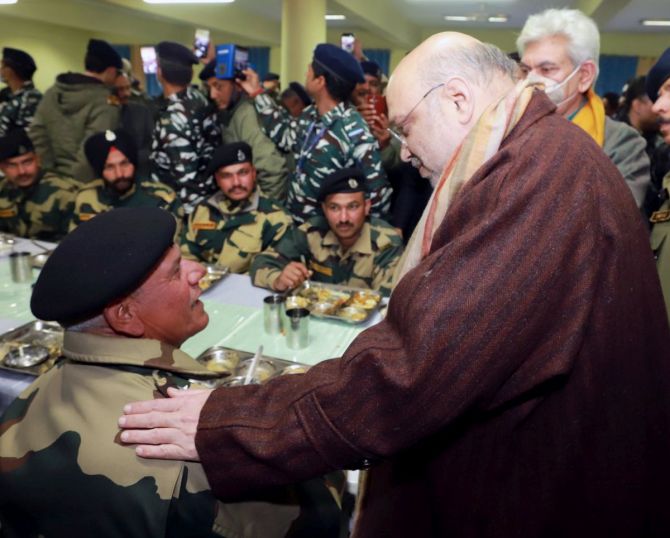 Shah said the people of J-K have accepted the decision of the revocation of Article 370.

"All the forces here have taken care of the law and order situation in a right manner. So, as the country's home minister, I thank you for the good work," he said.

Shah said when Modi's vision of development in J-K is completed successfully, there will be peace.

"And I believe that we will be able to see it in our lifetime only," he said.

"Jammu and Kashmir stands as an example of the fact if we are able to provide a secure environment and grassroots level democracy, anything can be achieved," the minister said, adding development in J-K is moving ahead at a double speed.

Shah said India, which was at the 11th position in 2014, will be a major economic power soon.

"Today we are at sixth position and I am sure that by 2024 we will reach the third position," he said.

The Union minister said it was an honour for him to spend a night with the CRPF jawans at the campus in Pulwama. 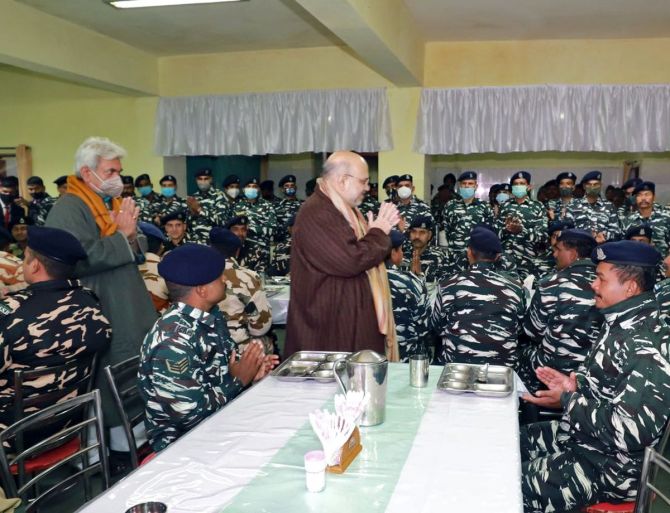 "It is a very important programme for me to be with the forces whether the Army, Border Security Force, CRPF or Sashastra Seema Bill who are protecting every last inch of the border. This is the last programme of my J-K visit and I can say this without any doubt that it is the most important programme," he said.

A suicide bomber of the Pakistan-based Jaish-e-Mohammed (JeM) terror group had attacked a CRPF convoy in Pulwama district on February 14, 2019, leaving 40 personnel dead.

India then launched a counter-terror airstrike against a JeM training camp in Balakot on February 26.

The next day, Pakistan Air Force had retaliated and downed a MiG-21 in an aerial combat and captured its pilot Wing Commander Abhinanadan Varthaman, who was later released.

The IAF had said that during the aerial engagement on February 27, one of its MiG-21 Bison shot down a Pakistani F-16 fighter jet.

IMAGES: Union Home Minister Amit Shah along with Jammu and Kashmir Lieutenant Governor Manoj Sinha visits Lethpora CRPF camp, in Pulwama on Monday. Photographs: ANI Photo and MHA Handout via PTI
© Copyright 2022 PTI. All rights reserved. Republication or redistribution of PTI content, including by framing or similar means, is expressly prohibited without the prior written consent.