Fissures in the Congress in Punjab deepened on Thursday with chief minister Amarinder Singh changing Navjot Singh Sidhu's portfolio within hours of the cricketer-turned-politician snubbing him by skipping a cabinet meeting. 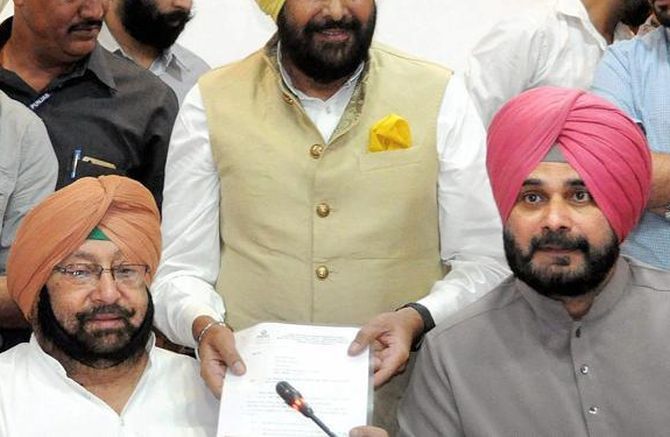 Thursday's fast-paced developments came amidst the simmering tension between Singh and Sidhu which was triggered by the chief minister's allegations that the minister's "inept handling" of the crucial local government department had resulted in the Congress' "poor performance" in urban areas in the Lok Sabha elections.

Asserting that he cannot be taken for granted, Sidhu told reporters that his department "is being singled out publicly" and claimed that urban areas had played a pivotal role in the party's victory in Punjab.

Sidhu was divested of the local government and tourism and cultural affairs departments and given the power and new and renewable energy sources portfolio in the cabinet rejig, which the chief minister said will re-energise his team and further streamline the government.

Barring four ministers, there are some changes in the portfolios of all the others as a result of the reallocation, according to an official statement.

On the Congress's performance, Singh had also said that Sidhu is perhaps "ambitious" and "wants to be the chief minister".

He had also alleged that the urban vote bank, which was the backbone of the Congress in Punjab was impacted by Sidhu's “failure” to do any development work.

"I cannot be taken for granted. I have been a performer throughout in 40 years of my life be it international cricket, or world class commentary with Geoffrey Boycott, TV shows or 1,300 motivational talks," Sidhu, adding that he would defend his name, credibility and performance "fiercely".

On his skipping the meeting, the Congress leader said, "Everybody is asking me why I did not go to the cabinet meeting. Oath is administered when you become a cabinet minister, then it is said that it is a collective responsibility."

"I have been a political science student and it is taught that the rule is 'we swim and we sink together'," the cricketer-turned-politician said.

Referring to past cabinet meetings, Sidhu said his chair in these meetings may be "three inches" away from that of the CM's, "but it seems I am too far from him and he (Singh) lacks faith in me."

The chief minister had also taken umbrage for Sidhu's "rebellious" remarks and “friendly match” jibe at Bathinda on May 17 during a poll rally, when he appeared to corner the state government over the issue of desecration of religious scriptures and questioned why no FIR was lodged against the Badals in connection with the 2015 sacrilege and police-firing incidents.

In the recently held general election, Congress won eight of the 13 seats. The SAD-BJP combine won four while the AAP managed to win only one seat.

"I never raised a finger at my own people nor will I raise today. But I have earned a name, I command respect and I will never allow anyone to put a blot on it.

"I will defend it fiercely. I will defend my name, my credibility and my performance very fiercely. I have all the respect for every Congressman. My fight is always against my opponents,” Sidhu said.

"The Congress made a gigantic leap in the 2019 Lok Sabha elections in Punjab by defeating the Modi wave, especially in urban areas which played a pivotal-role in changing the fortunes of the party as compared to that in the 2014 elections,” Sidhu claimed.

In 2014, the Congress won three seats out of the 13 parliamentary constituncies in Punjab and the SAD-BJP combine six seats.

But, in 2019, the party won in 69 assembly segments, taking the tally to eight Lok Sabha seats. Out of these 69 segments, 34 are in urban areas, he claimed.

"The Congress won in all the major cities of Punjab, including Amritsar, Jalandhar, Ludhiana, Patiala and SAS Nagar.Digging for facts is a much better exercise than jumping to conclusions,” Sidhu said.

He claimed that his local government department had raised resources to the tune of Rs 10,000 crore for development.

Sidhu had earlier earned the ire of his cabinet colleagues when he had last year in Hyderabad said, Congress president Rahul Gandhi is my captain and also that of Amarinder Singh.

Commenting on the absence of Sidhu from the cabinet meeting, Punjab minister Sadhu Singh Dharmsot said Sidhu should have attended it.

"I am not Sidhu's assistant. I am not responsible if he does not attend the meeting. If he was having a parallel (press) meeting then it is indiscipline," Sukhjinder Singh Randhawa, another minister, said.

Singh, who had hinted at a reshuffle after the completion of the poll process, has allocated the local government department to his senior-most colleague Brahm Mohindra and the tourism and cultural affairs portfolio to Charanjit Singh Channi.