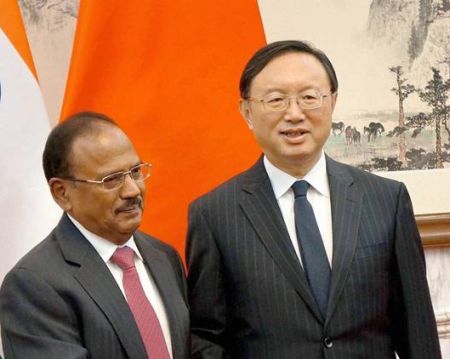 Amid the Sikkim standoff, China on Monday hinted that a bilateral meeting between State Councillor Yang Jiechi and National Security Adviser Ajit Doval could take place on the sidelines of a BRICS NSAs' meet in Beijing.

Chinese Foreign Ministry spokesman Lu Kang, during a briefing, left the door open for talks between Doval and Yang by saying that he cannot confirm it but in the past meetings of BRICS NSAs, the officials have held bilateral meetings.

"I don't have relevant information you mentioned right now. As far as we know during the previous meetings the host countries arranged for the heads of the delegations to hold bilateral meetings in which they exchanged views on bilateral relations, BRICS cooperation and multilateral affairs," Lu said when asked whether there would be a bilateral meeting between Yang and Doval.

Doval is set to travel to Beijing to attend the BRICS NSAs meeting scheduled to be held from July 27-28. Both Doval and Yang are Special Representatives of the two countries in the boundary talks.

External Affairs Ministry spokesperson Gopal Baglay, while replaying to a question about Doval's schedule in Beijing, had last week said that if there are any further developments in his programme then the media will be informed.

Asked whether the Doklam standoff will figure in the BRICS NSAs' meeting since the agenda included discussion on regional hotspot issues, Lu said, "China and India enjoy smooth diplomatic channels".

"The Indian border troops illegally crossed into China's territory. We once again urge India to pull back its troops to the Indian side of the boundary. I want to stress again that this is the precondition for any meaningful talks between the two sides," he said.

Lu also declined to comment whether the BRICS NSAs would call on Chinese President Xi Jinping or Premier Li Keqiang, saying that he has no information on it.

The tradition of the previous BRICS NSA meetings has been that it was followed by a meeting with the top leaders of the host country.

In his briefing, Lu said Doklam standoff is like no other between India and China.

Last week, External Affairs Minister Sushma Swaraj had told Rajya Sabha that China intends to unilaterally change the status of the tri-junction with Bhutan, which poses a challenge to India's security.

Of the 3,488-km-long India-China border from Jammu and Kashmir to Arunachal Pradesh, a 220-km section falls in the Sikkim section.