Amid China tension, Jaishankar to visit Japan in Oct for Quad meet

External Affairs Minister S Jaishankar will visit Tokyo from October 6 to 7 to attend a ministerial meeting of the Quadrilateral coalition and hold talks with his Japanese counterpart Toshimitsu Motegi on ways to further deepen bilateral ties. 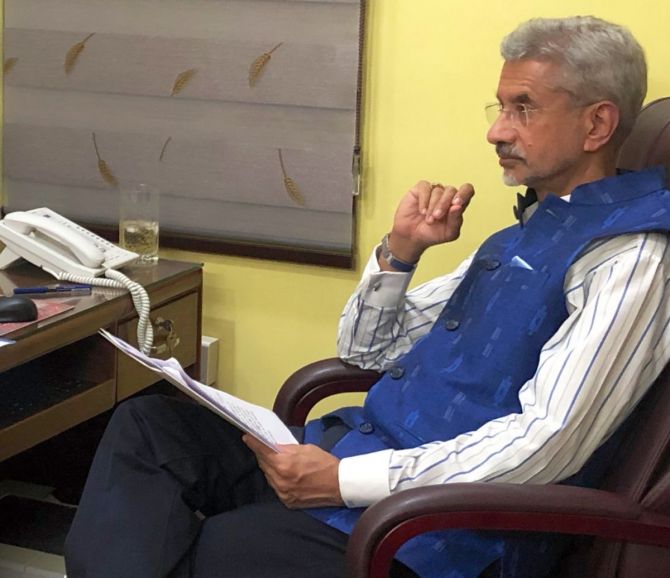 Announcing the visit, the ministry of external affairs said Jaishankar and Motegi are expected to discuss a range of bilateral and regional issues of mutual interest.

"During the visit, the external affairs minister will also participate in the second India-Australia-Japan-USA ministerial meeting on October 6 in which the foreign ministers of the respective countries will participate," the MEA said.

It said the ministers will collectively affirm the importance of maintaining a free, open and inclusive Indo-Pacific. The second meeting of the Quadrilateral coalition or Quad comes in the backdrop of growing global concerns over China's military muscle flexing in the Indo-Pacific region.

The MEA said Jaishankar will also hold bilateral consultations with the foreign ministers of Australia and the US during the visit to Japan.

It said the foreign ministers will discuss the post-COVID-19 international order and the need for a coordinated response to the various challenges emerging from the pandemic.

On Friday, Prime Minister Narendra Modi and his Japanese counterpart Yoshihide Suga held a telephonic conversation during which they discussed ways to deepen cooperation for a free and open Indo-Pacific region.

In November 2017, the four countries gave shape to the long-pending proposal of setting up the "Quad" to develop a new strategy to keep the critical sea routes in the Indo-Pacific free of any influence.

The first meeting of foreign ministers of the four countries under the 'Quad' framework had taken place in New York in September 2019.

India is also expanding bilateral cooperation with Japan, the US and Australia in the Indo-Pacific region.

On its part, the US has been pushing for a greater role for India in the Indo-Pacific which is seen by many countries as an effort to contain China's growing clout in the region.

In their bilateral talks, Jaishankar and Motegi are expected to prepare ground for the annual India-Japan summit later this year.

Meanwhile, China criticised the forthcoming meeting of the Foreign Ministers of India, Australia, Japan and the United States in Tokyo, saying it is opposed to the formation of "exclusive clique" harming third party's interests.

Asked by a western media journalist for his reaction to the meeting of Foreign Ministers of India, Japan, US and Australia also known as Quadrilateral Security Dialogue or Quad, Chinese Foreign Ministry spokesman Wang Wenbin told a media briefing here that "peace, development and global cooperation is the overriding trend of today's world".

"Multilateral and plurilateral cooperation should all be open, inclusive and transparent. No one should seek an exclusive clique," he said.

"Efforts should be made to enhance regional countries mutual understanding and trust, instead of targeting a third party or harming third party's interests," he said.

"We hope the relevant country will proceed from the interests of regional countries and do more things conducive to regional peace, stability and development instead of the contrary," Wang said.