Amid LAC standoff, IAF to equip Rafale with new missiles

As it inducts a first batch of five Rafale jets in the midst of the border row with China in eastern Ladakh, the Indian Air Force is looking at integrating the fleet with new generation air-to-ground missile systems having a strike range of up to 60 KM, people familiar with the development said. The people cited above said the IAF is zeroing in on procuring new generation medium-range modular air-to-ground weapon system Hammer to integrate with the Rafale jets, using the emergency financial powers provided by the government to the armed forces for faster acquisition of key weapons and platforms.

In view of the border row with China, the defence ministry this month granted special powers to the three services for individual capital procurement programme worth Rs 300 crore to meet emergent operational requirements.

There will be no cap on the number of procurement programmes and that each acquisition under the emergency requirement category should not cost more than Rs 300 crore, according to officials.

They said the first batch of Rafale jets is likely to be deployed in the Ladakh sector by the second half of next month. India will receive a total of 36 Rafale jets under a Rs 58,000 crore contract.

The Meteor, Scalp and MICA weapons system will be the mainstay of the Rafale jets.

The Meteor is the next generation of BVR air-to-air missile (BVRAAM) designed to revolutionise air-to-air combat. The weapon has been developed by MBDA to combat common threats facing the UK, Germany, Italy, France, Spain and Sweden.

The Scalp is a deep-strike cruise missile known for having pinpoint terminal accuracy through its highly accurate seeker and target recognition system.

The Rafales will also be equipped with MICA weapon system which is integrated into IAF's Mirage 2000 aircraft.

The IAF spent around Rs 400 crore to develop required infrastructure like shelters, hangers and maintenance facilities at the two bases. 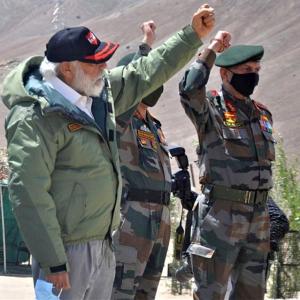