Pakistan Prime Minister Nawaz Sharif and powerful army chief General Qamar Javed Bajwa on Wednesday agreed not to come under any pressure on the issue of Indian national Kulbhushan Jadhav who has been sentenced to death on charges of spying, according to a media report. 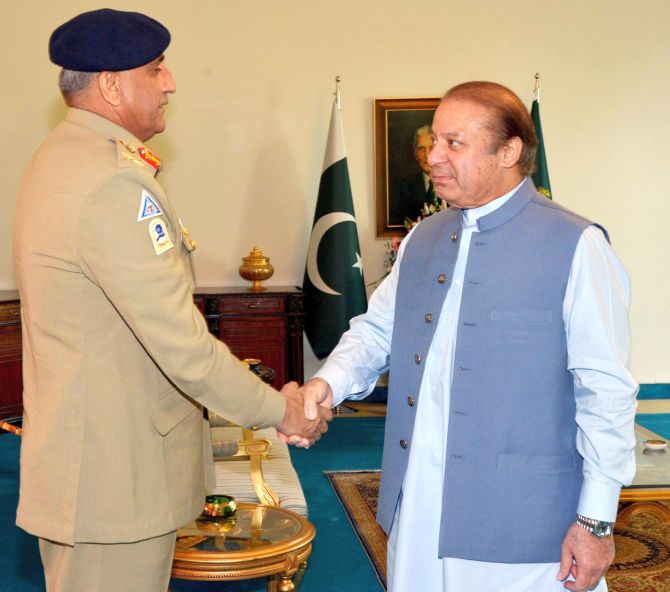 Chief of Army Staff General Bajwa met Sharif and took the prime minister into confidence regarding the issue of Jadhav, Samaa TV reported.

"They agreed not to come under any pressure" on the issue of Jadhav, the channel said, without giving the details.

During the meeting, they discussed matters pertaining to professional preparedness of army, the current security and border situation at their meeting held in Islamabad, Radio Pakistan reported.

General Bajwa also apprised the prime minister about the progress made in the ongoing operation Radd-ul-Fasaad, a terror operation launched by the Pakistan Army to eliminate terrorism.

It was the first direct interaction between the army chief and the prime minister.

The meeting comes two days after the army chief approved the execution of Jadhav after a military court sentenced him to death for "espionage and sabotage activities", evoking a sharp reaction from India which warned Islamabad to consider the consequences on bilateral ties if he is hanged.

External Affairs Minister Sushma Swaraj on Tuesday made a statement in both the Houses, asserting that India will go "out of way" to ensure justice to Jadhav who is an "innocent kidnapped Indian".

Jadhav's execution will be taken by India as a "pre-meditated murder" and Pakistan should consider its consequences on bilateral relations, if it proceeds on this matter, Swaraj warned.

She said the charges against Jadhav, who was doing business in Iran and was kidnapped and taken to Pakistan, are "concocted" and the trial against him was "farcical", leading to an "indefensible verdict".

Sharif has said that America can play a "very critical role" in resolving the Kashmir issue with India as he hoped to see proactive engagement by the Trump administration on the issue.

"With regards to Kashmir, America can play a very critical role, which it has not done," Sharif was quoted as saying by the state-run Associated Press of Pakistan.

The prime minister said that the world, including the US, was well aware of the danger the dispute posed to world peace and to the stability in the region.

"We wish to see progress towards the resolution of the Kashmir dispute, which is the biggest hurdle in the way of peace and development in the region and the whole world, including the US, is fully aware of this reality," he said.

Earlier this month, US Ambassador to the UN Nikki Haley had said the US would try and "find its place" in efforts to de-escalate Indo-Pak tensions and not wait till "something happens", signalling an apparent change in the US stance of not engaging in Indo-Pak disputes.

"It's absolutely right that this administration is concerned about the relationship between India and Pakistan and very much wants to see how we de-escalate any sort of conflict going forward," said Haley, a senior Indian-American member of the Trump.

Hours later, India had swiftly rejected any US role in resolving Indo-Pak issues.

However, Pakistan's envoy to the US Aizaz Ahmad Chaudhry had welcomed the US offer and said any positive role that the US plays to bring peace and stability in South Asia can serve the region well.

On Pakistan-US relations, Sharif said the two countries had a long history of bilateral relations and expressed hope that under President Trump, the bilateral ties would improve.

"We want trade not aid from the United States," the prime minister said, adding that Pakistan wished to have cordial relations with all countries on the basis of mutual respect.

Referring to the mega projects being implemented under the China Pakistan Economic Corridor, he said that the CPEC has a huge potential to generate economic activities in the entire region and Pakistan would welcome other countries to be part of it and share the benefits the multi-billion dollar project.

The CPEC, an ambitious USD 46 billion project, will link the Pakistani city of Gwadar to China's Xinjiang via a vast network of highways and railways. 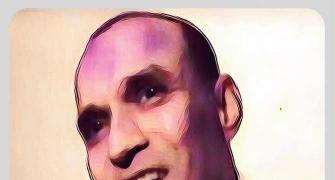