The political divide between the Hindu supporters of United States President Donald Trump and his Democratic challenger Joe Biden is getting deeper with the presidential election less than two weeks away. 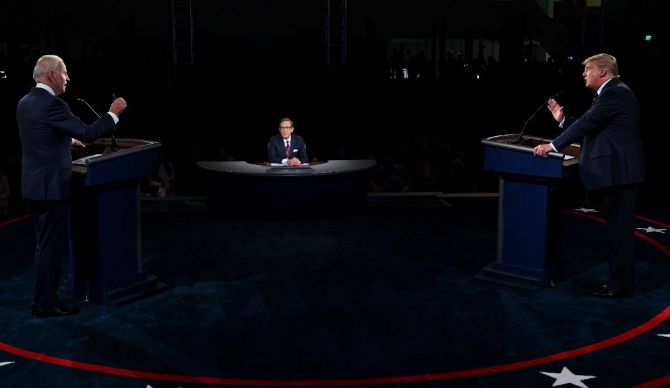 In a sign of the growing political prominence of Hindus in America, the Trump and Biden campaigns are wooing this religious minority community like never before.

Hinduism is the fourth largest faith in the US, representing approximately one per cent of the US population in 2016.

The Biden campaign in September launched the 'Hindu Americans for Biden', while the Trump campaign in August announced the formation of the 'Hindu Voices for Trump' as part of their efforts to attract the over two million members of the religious community in the US.

A virtual debate held on Sunday between the American Hindu supporters of Trump and Biden brought the message home that there is a clear political divide among the community members in the US.

While one group alleged that Biden 'panders to Muslims', the other accused Trump of being a 'racist'.

During the debate, the Biden team alluded to the Obama-Biden administration's lifting of nuclear sanctions against India as a demonstration of Biden's pro-India stance, while the Trump side brought to light how Biden as the senate foreign relations committee chair passed a bill pumping billions of dollars for improving Pakistan's economy which ended up funding the Pakistan military and promoting terrorism across the border.

On the other hand, Trump, they said, named Pakistan a 'country of particular concern' for supporting cross-border terrorism and drastically cut the financial aid to the nation.

They recalled that the Hindus had asked the Obama administration to cut aid to Pakistan, but it was not done.

A much more direct question to the Biden team was about the party platform having sections on American Muslims, American Jewish, but 'nothing clear cut about American Hindu community, not even a mention'.

In response, the Biden team said the Democratic Party as a policy recognises 'cultural communities' and not religious communities, thus, its policy towards 'Indian American community' is on the platform.

Utsav Chakrabarty, a Trump supporter, said he had written at least six letters to the Democratic Party leadership, asking them to post a policy paper on American Hindus, but he never got any response.

A Democratic Party operative, he claimed, told him that unless he made a contribution to the Biden campaign, nothing would change.

Tushar Dayagude, another Trump supporter, echoed Chakrabarty's assertion that campaign contribution was a must for Hindus to have their cause recognised in the Biden team.

Dayagude opined that the Hindu members contributing to the Trump campaign was the reason the Biden campaign ignored the community.

In this context, Srilekha Palle, a Trump supporter from Fairfox, Virginia, disputed the assertion that the American Hindus largely donated only to the Trump campaign.

Palle pointed out that a prominent Houston-based American Hindu raised $3.5 million from the community members in single night for Biden campaign.

Trump supporters said the Democrats have always 'pandered to Muslims' and its support to the Hindu community was nothing more than a 'tokenism'.

To drive home their point, they cited the Diwali celebration at the White House in 2012 when Obama was the President.

The supporters pointed out that the Democrats invited the Islamic Society of North America as one of the sponsors of the event and provided a platform to its spokesperson to speak at the Hindu religious festival.

The tweet has now been deleted by Meena, 35, who is a lawyer and a children's book author.

Meena had tweeted the image to greet Hindus on the ongoing festival of 'Navratri', which celebrates the power of women and the triumph of good over evil.

In the image, Kamala Harris, depicted as goddess Durga, was seen killing President Trump, who was depicted as buffalo demon 'Mahishasura'.

The image also showed Biden as a lion, the 'vahana' (vehicle) of the goddess.

Chakrabarty said the only outreach the Biden team has made to Hindus is this kind of 'tokenism, which at best is cheap and hurtful and at its worst, creates Hindu phobia'.

The Trump team at the debate included Jay Kansara, a former director of governmental relations for the Hindu American Foundation in Washington, DC, who played a key role in the Howdy Modi summit last year.

The Biden team panelists were Nish Acharya, who was Director of Innovation & Entrepreneurship in the Obama administration; and Niki Shah, a Hindu community organiser who worked closely on Hindu initiatives for former president Obama's faith-based council.