A forum of families of victims of insurgency in Assam has called upon the Election Commission not to entertain nominations filed by former militants to contest the ensuing assembly election in the state.

The Terror Victims' Family Forum, a platform of over 6,000 militancy-affected people in Assam, expressed concern over some political parties giving nomination to such former militants and stated that such candidates should not be allowed to contest election till they face trial in the court of law and punished according to the law.

Forum president Brojen Hazarika told mediapersons that political parties in Assam had set a bad precedence by giving nominations to former militants to contest election given that so many innocent people in the state had to bear the brunt of brutal actions by militant groups over the years.

The forum is of the opinion that because one has left a militant outfit and had surrendered should not make him/her eligible for contesting election until the person is tried in the court of law for the crimes, if he/she had committed a crime while being a member of an outlawed insurgent group.

Assembly election is being held in Assam in two phases on April 4 and April 11. According to nominations filed so far, five former militants of the banned United Liberation Front of Asom are in the fray.

Two of them are sitting MLAs -- Jiten Gogoi (Bokakhat LAC) and Kushal Duwai (Thowra LAC). They are contesting this election as Independents.

Moreover, the Bodoland People's Front which is also fielding candidates in assembly polls for the second consecutive occasion, is a political party formed by former militants belonging to the now disbanded Bodo Liberation Tiger.

The BPF was formed after the government of India signed Bodo Peace Accord with the BLT. The BPF is now in the helm of affairs in Bodoland Territorial Autonomous District Council, a fruit of Bodo Peace Accord.

Though many former BLT men are now ruling the BTADC as well as are sitting MLAs in Assam assembly as members of the BPF, the cases registered against them while they were in BLT ranks are yet to be disposed off. 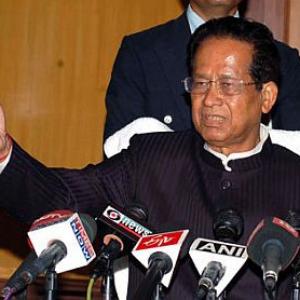