Alliance with BSP, RLD final; no problem in seat-sharing: Akhilesh

'They (BJP) can claim of winning even 82 seats, despite the fact that Uttar Pradesh has only 80 seats'

'How can we have an understanding with it (Congress)? It is a national party. We have given them two seats (Amethi and Raebareli), which the SP had been leaving for them' 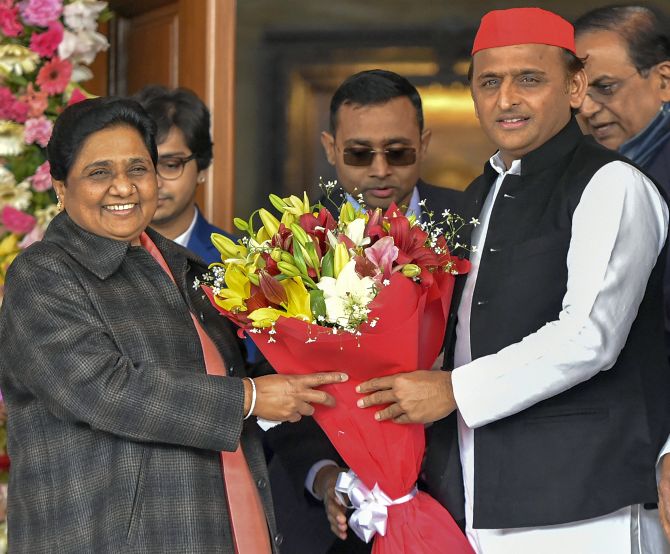 The Samajwadi Party's alliance with the Bahujan Samaj Party and the Rashtriya Lok Dal was "final" and there would be no issues as regards seat-sharing in the coming Lok Sabha polls, party chief Akhilesh Yadav said on Friday, while ruling out any understanding with the Congress.

"Our alliance with the BSP, the RLD and smaller parties like the Nishad Party is final and seat-sharing will not be a problem. It will be worked out soon. We have emerged as a strong force in the state, which has changed the tone and tenor of the BJP, whose leaders have started using foul language against us," the SP national president told PTI.

"Uttar Pradesh has always acted as a catalyst for change. This time, the people of the state will change the prime minister. Our fight is with the BJP and the people are supporting us," Yadav said in an interview at the SP headquarters in Lucknow.

He, however, ducked the question as to who would be his choice as the next prime minister.

Maintaining that the SP will only "concentrate" in Uttar Pradesh, Yadav ruled out any understanding with the Congress in the state in the Lok Sabha polls.

"How can we have an understanding with it (Congress)? It is a national party. We have given them two seats (Amethi and Raebareli), which the SP had been leaving for them. Presently, my focus is on Uttar Pradesh. In Madhya Pradesh and Uttarakhand also, the SP will field one or two candidates who are strong and we will explore (the possibility of an) alliance with others," he said.

Reminded about his friendship with Congress president Rahul Gandhi, with whom he had given the UP ke ladke (boys from UP) slogan in the 2017 state assembly polls, Yadav, who is three years younger to Gandhi, said, "I will not like to talk about the Congress as of now."

Asked about his recent meeting with Rashtriya Lok Dal leader Jayant Chowdhury, he said, "Our alliance is final. In Kairana, we had fielded RLD leader Tabassum Hasan on an SP ticket. We will give Mathura and Baghpat to them, which they want. There is no problem in the alliance now."

Asked about Bahujan Samaj Party supremo Mayawati's charge that his uncle and Pragatisheel Samajwadi Party chief Shivpal Yadav was being financed by the ruling Bharatiya Janata Party, Yadav preferred not to speak.

"I will not say anything on this," he said.

Announcing the SP-BSP tie-up at a press conference last week, Mayawati had claimed that the BJP had funded Shivpal's party and said the entire money would go down the drain as there would be no split in the SP-BSP votes.

On the BJP, Yadav said, "It had promised many things, but those were never met. The common people are fed up with it and are looking at an alternative. They have only hope, which is the SP-BSP alliance."

Attacking the saffron party, he said it had changed its Uttar Pradesh in-charge only to save one seat (of Prime Minister Narendra Modi).

"The BJP MPs did not work on the ground. They never visited their areas. Now it is being said that they are going to change 60 per cent of their candidates. But such tricks will not work now," Yadav said.

In a lighter vein, he added, "If only they can manage to control the stray cattle, they can get some votes of the farmers." IMAGE: Mayawati and Akhilesh Yadav during a joint press conference to announce the SP-BSP alliance in Lucknow on January 12, 2019. Photograph: Nand Kumar/PTI Photo

On the claim of JP Nadda, the BJP's poll in-charge for Uttar Pradesh, that the saffron party would win 74 Lok Sabha seats in the state, Yadav said, "They can claim of winning even 82 seats, despite the fact that Uttar Pradesh has only 80 seats."

Nadda, the Union health minister, during his visit in Lucknow this week had asserted that the BJP and its allies would bag at least 74 Lok Sabha seats -- one more than the NDA tally in 2014 -- in Uttar Pradesh.

On reports of a slew of poll sops the Centre was planning to announce in its Budget, Yadav said, "All the major steps of the Centre like demonetisation, GST and claims of good governance have failed. They cannot be trusted. I want to alert my party workers that the BJP cannot be trusted. They can resort to any conspiracy or gimmick for political gains."

On the ongoing Kumbh at Prayagraj, the SP chief said, "They (BJP) have renamed the Ardh-Kumbh as Kumbh. At Kumbh, people are not invited. People themselves come to attend it to attain moksha (salvation). Are they calling people for moksha?"

Asked about state director general of police OP Singh's claim that the crime rate was witnessing a downward trend in Uttar Pradesh, Yadav questioned the data.

"The Centre's data claims to have given jobs to the youth. Did they get those jobs? The law-and-order situation of the state is known to all. The lie will not work any longer," he said.

On reports that the Central Bureau of Investigation might quiz him in connection with a mining scam, Yadav said, "I will answer them. These are the BJP's tactics ahead of the polls."

On the possibility of his wife and Kannauj MP Dimple Yadav contesting the Lok Sabha polls, the former Uttar Pradesh chief minister said, "I do not want her to contest this time. However, the decision is hers. We have to bring up three children. The house is now far from the children's school. How to manage their tuitions etc. needs to be seen."

"They (the BJP government) have not approved the map for our house construction. They do not understand the responsibilities of a family as they do not have one," Yadav said. 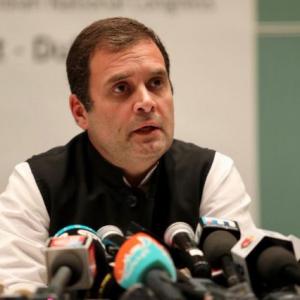