A veteran journalist working for Al Jazeera was killed on Wednesday during an Israeli operation in the West Bank city of Jenin, prompting the Palestinian Authority (PA) and the Qatar-based network to blame the Israeli Army for her death. 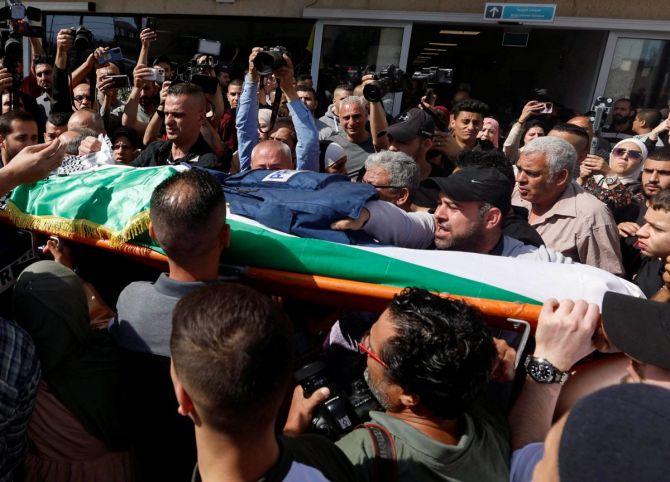 The Palestinian health ministry said that 51-year-old Shireen Abu Aqla, a Jerusalem-based journalist for Al Jazeera, was hit in the head by live fire.

A second reporter, Ali Samodi from Al Quds newspaper sustained a gunshot wound to the back and is in stable condition, the ministry said.

The Israeli military denied that its forces targeted the journalists and called for a 'joint pathological analysis and investigation' to establish the truth.

Israeli forces were operating in the Jenin refugee camp and several other areas of the West Bank to apprehend 'terror suspects', the military said.

According to the Israeli Defence Forces (IDF), the militants opened fire at the Israeli forces and hurled explosives at them during the raid, before the soldiers returned fire.

The IDF was looking into 'a possibility, now being looked into, that reporters were hit -- possibly by shots fired by Palestinian gunmen', the Israeli army said.

Al Jazeera said that she was killed 'in cold blood', in what the network called a 'horrifying crime that breaches international norms'.

'We condemn this heinous crime, intended to prevent the media from carrying out its message, and we hold the Israeli government and the occupation forces responsible for her death,' the channel wrote on Twitter.

'We call on the international community to condemn and hold the Israeli occupation forces accountable for the deliberate killing of our colleague Shireen Abu Aqla,' it said.

In footage from the scene, Abu Aqleh was seen wearing a PRESS vest and a helmet and was hit below the ear in an area not covered by her helmet.

Samodi, working for the Jerusalem-based Al Quds, told the local media that he and Abu Aqla were clearly identified as reporters, wearing their press vests, when they were shot at.

Describing Palestinian accusations as "unfounded", Israeli Prime Minister Naftali Bennett in a statement to the Knesset (parliament) on Wednesday defended the Israeli army, which he said acted "carefully and responsibly" during its operation in the West Bank.

"To begin with, I would like to address the events in Jenin. Last night, IDF (Israel Defence Forces) forces conducted an extensive operation in northern Samaria, as part of the efforts of the State of Israel to stop the deadly wave of terrorism.

“During the engagement, armed Palestinians shot in an inaccurate, indiscriminate and uncontrolled manner. Our forces from the IDF returned fire as accurately, carefully and responsibly as possible", Bennett told the Knesset.

"Sadly, Al Jazeera journalist Shireen Abu Akleh was killed in the exchange. The Palestinian Authority rushed to blame Israel for her death, and the president of the PA made unfounded accusations against Israel before any investigation had been carried out," he said.

Based on preliminary information, there is a significant possibility that the journalist was shot by the armed Palestinians. However, to uncover the truth, there must be a real investigation, and the Palestinians are currently preventing that, he said.

"Without a serious investigation, we will not reach the truth," he said.

Bennett called upon the PA to conduct a joint forensic analysis based on all the documentation and findings available in order to uncover the truth.

"As I said, the Palestinians are refusing, and I expect them to cooperate and refrain from any actions that may contaminate the investigation," he said.

Bennett said last night's action in Jenin was part of a series of counterterrorism efforts meant to put an end to the wave of terrorism and restore security to Israeli citizens.

“We are determined to continue until we have achieved our goal, and we stand by our men and women of the IDF, the ISA (Israel Security Agency) and the police, who risk their lives daily to protect ours," Bennett asserted.

According to the information, it appears likely that armed Palestinians -- who were firing indiscriminately at the time -- were responsible for the unfortunate death of the journalist, he said in a statement.

"Palestinians in Jenin were even filmed boasting 'We hit a soldier; he's lying on the ground'. However, no IDF (Israel Defence Forces) soldier was injured, which increases the possibility that Palestinian terrorists were the ones who shot the journalist," Bennett was quoted as saying in a statement.

"Israel has called on the Palestinians to conduct a joint pathological analysis and investigation, which would be based on all of the existing documentation and findings, in order to get to the truth. So far, the Palestinians have refused this offer," he said.

He also asserted that the IDF forces will continue their counterterrorism operations in order to end the “deadly wave of terror” and restore security to the citizens of Israel.

Born in East Jerusalem, Abu Aqla had worked for several agencies such as UNRWA, Radio Voice of Palestine, Amman satellite channel, the Moftah Foundation and Radio Monte Carlo before joining Al Jazeera in 1997.

Human rights group Yesh Din called for an international investigation into her death, saying that the Israeli defence establishment “has proven in several cases that it is unable to investigate such incidents on its own.”

Abu Aqla's death “requires urgent international intervention in order to get to the truth, we call for the establishment of an independent international commission of inquiry to investigate this case in depth,” it said.

The IDF has been operating in Jenin and across the West Bank in an attempt to stop a series of recent attacks that have killed 19 people in a month and a half.

Close to 30 Palestinians have also been killed in Israeli operations during this time.

Harinder Mishra
© Copyright 2022 PTI. All rights reserved. Republication or redistribution of PTI content, including by framing or similar means, is expressly prohibited without the prior written consent.