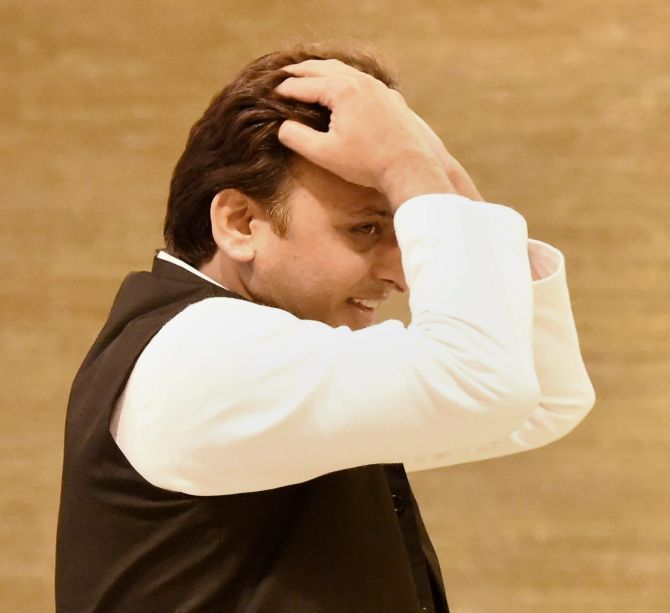 The feud in Uttar Pradesh's first family has ended, with Chief Minister Akhilesh Yadav on Saturday night restoring all but one portfolios of Shivpal Yadav and promising to support him as SP's state unit president, a post from which he was himself removed three days back triggering the power tussle with his uncle.

As per the compromise worked out by SP chief Mulayam Singh Yadav, Akhilesh's demand of having a say in ticket distribution has been met as he will be made the head of the state Parliamentary Board, which makes final decisions on deciding the candidates, party sources said.

Before the announcement was made, Mulayam held a meeting with brother Shivpal and Akhilesh this evening to end the deadlock and discuss ways to strengthen the party.

Akhilesh restored Shivpal's key portfolios, including Irrigation and Cooperative which were taken away three days back.
Shivpal was also given additional portfolios of Minor Irrigation and Medical Education.

However, Public Works Department, which was among the portfolios taken away from Shivpal, was kept by the CM with himself.

Akhilesh had stripped Shivpal of the portfolios and sacked Prajapati after he was replaced by his uncle as the party's state unit head, triggering a full blown war in the family. Subsequently, Shivpal had tendered his resignation from the Cabinet as well as party post.

"I have myself congratulated SP's UP unit president Shivpal Yadav after meeting him at his residence.... I will extend all my support to Shivpalji," Akhilesh told reporters here earlier in the day, indicating rapproachment with his uncle with whom he was engaged in a turf war.

His remarks came a day after he said he felt "very sad" when he was replaced with Shivpal as the state party president by his father Mulayam Singh Yadav.

With Shivpal getting party's responsibility, a major overhaul in the organisation is likely.

There are speculation that present state general secretary Arvind Singh Gope might be replaced by Om Prakash, while party spokesman Rajendra Chowdhury will be removed and senior party leader Amibka Chowdhury will be given his charge.

The final decision regarding the changes will however be released to media after a go-ahead by Mulayam.

On Friday night, after Mulayam's intervention, Akhilesh announced that Shivpal will be given back his portfolios and Gayatri Prajapati will be reinducted as Cabinet minister, issues which had triggered an all-out war between the two.

When asked about his meeting with Shivpal, Akhilesh on Saturday said in a lighter vein, "You (reporters) can say anything. You are saying I had lunch there, but I only had tea".

About his demand on ticket distribution, the chief minister said, "It's going to be my examination (in elections). I will certainly say that much to the national president whom I like."

He added that "Politics is not a game for me, it is a serious business. I am a player... have played football and cricket also... I don't score self goal."

In the morning, hundreds of Akhilesh supporters reached the party office here demanding his reinstatement as the state president.

Donning red caps and carrying posters of the chief minister and his wife Dimple Yadav, the supporters started for the party office this morning, raising slogans like "Akhilesh ko adyaksh banao" (make Akhilesh the state president), saying only "Akhilesh bhaiya could lead the party".

About protests by his supporters, Akhilesh said, "I have appealed them not to engage in any sloganeering or use any posters or hoardings. It's election time and everyone should go to booth level and spread awareness on the good work done by the government."

"Wherever the youths go, the direction changes. We have a great organisation," he said.At the party office, Mulayam rebuked the supporters of Akhilesh as well as Shivpal for taking to the streets over a dispute involving the two.

"I will not let this happen in the party. I have worked hard to bring it to this position. This 'tamasha' (circus) will not be allowed," he told the SP workers in a closed-door meeting, according to sources.

As soon as Mulayam arrived at the party office here, he was surrounded by party workers as well as the media. The SP supremo directly went to the auditorium where the supporters of his son Akhilesh were shouting slogans, demanding that he be reinstated as the party's state unit president.

Mulayam defended his decision of replacing Akhilesh with Shivpal as the Uttar Pradesh SP chief, saying his brother had worked "shoulder-to-shoulder" with him to bring the party to its current position.

The SP supremo also lashed out at the chiefs of the party's front organisations and asked them not to indulge in such protests and instead, work "on the ground" to strengthen the party.

On party's poll prospects, Akhilesh said, "Samajwadis are at number one. They surveys are pointing to it. When we only promised to work in 2012, we got tremendous support and now we have fullfilled all the promises. We will form government again. There is no rifht in the party"

On intervention of Mulayam, Akhilesh directed youth workers to meet him at his residence and he himself reached uncle Shivpal's residence to "congratulate him".