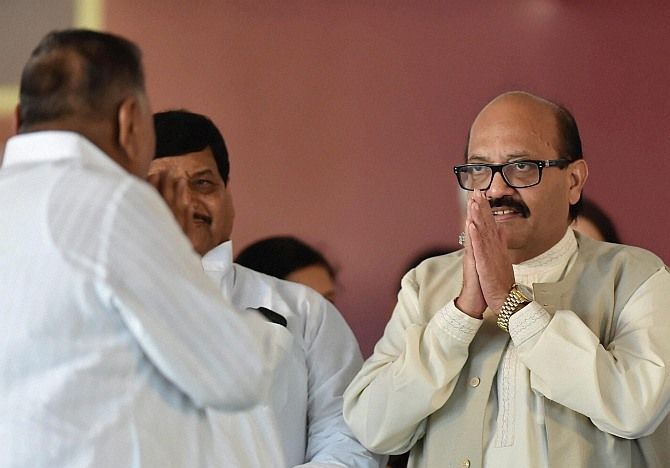 'How can Netaji forget Amar Singh called him names? He has come back to Netaji because he failed to gain entry in any political party.' Sharat Pradhan reports.

Amar Singh's return to the Samajwadi Party was the key issue when its leaders met in New Delhi on Wednesday, October 29.

Amar Singh, who had condemned Samajwadi Party supremo Mulayam Singh Yadav and his family after his ouster from the party, is now -- believe it or not! -- a front-runner for one of the six Rajya Sabha berths that the Samajwadi Party is entitled to.

Guess who Amar Singh's biggest supporter is? Mulayam Singh himself!

'Netaji' met Amar Singh on Wednesday and tried to win over other members of his family vehemently opposed to the ousted party general secretary.

Shivpal Yadav, Mulayam Singh's younger brother, stood by Netaji on Amar Singh, but Netaji's powerful cousin Ram Gopal Yadav, the party's leader in the Rajya Sabha, made it clear he was against Amar Singh's return.

Uttar Pradesh Chief Minister Akhilesh Yadav sided with Ram Gopal Yadav. If insiders are to be believed, an argument ensued between Akhilesh and his father, compelling Netaji to defer a decision on Amar Singh's return along with a Rajya Sabha seat.

Azam Khan, Uttar Pradesh's most powerful minister and whose word carries much weight with Mulayam Singh, also made it clear that Amar Singh should not return to the party.

"I don't see how the party gains by sending Amar Singh to the Rajya Sabha," a senior Samajwadi Party leader in Lucknow told this correspondent. "Only he benefits."

"How can Netaji forget Amar Singh called him names and did not miss a single opportunity to run down the party?" the leader asked. "He has come back to Netaji because he failed to gain entry in any political party."

Since the Samajwadi Party has a strength of 230 members in the UP assembly and a minimum of 36 MLAs are required to elect one Rajya Sabha member, the party is entitled to six of the 10 Rajya Sabha seats from UP that fall vacant and have to be filled on November 22 when the election will be held.

The Congress, with 28 MLAs, will struggle for even a single seat without the support of eight Rashtriya Lok Dal MLAs.

RLD chief Ajit Singh, who lost the Lok Sabha election, wants a Rajya Sabha seat badly and has come knocking on both the Congress and Samajwadi Party doors.