Former Union minister M J Akbar, who has filed a criminal defamation case against journalist Priya Ramani, told a Delhi court on Wednesday that an “immediate damage” has been caused to him due to the “scurrilous”, concocted and false allegations of sexual misconduct levelled against him. 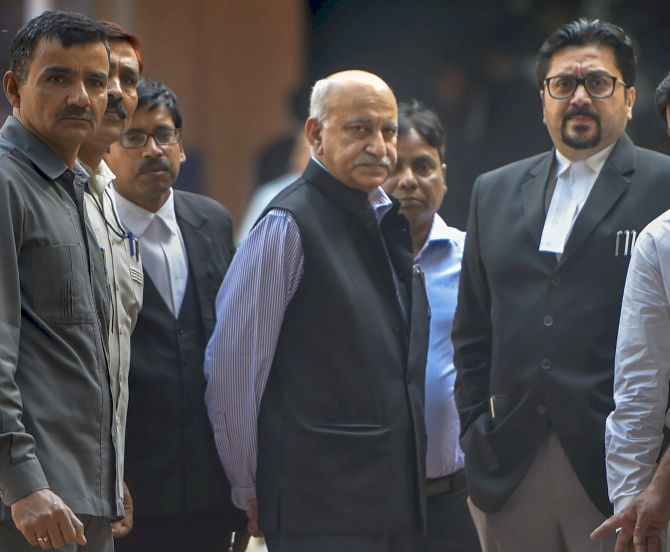 Akbar appeared before Additional Chief Metropolitan Magistrate Samar Vishal and recorded his statement to support the defamation complaint filed by him against Ramani on October 15.

Ramani has accused Akbar of sexual misconduct around 20 years ago.

“Indeed there was an immediate damage because of the scurrilous nature of these concocted and false allegations. I was attacked in my personal capacity about alleged and fabricated non-events allegedly done two decades ago,” he said in his statement.

“I chose in that environment to seek justice in my personal capacity without the Appurtenance of Office. This is why I offered my registration as Minister of State, Govt of India. My reputation has been tarnished in the eyes of general public and those who are near and dear and known to me,” he said.

Akbar, who had resigned from the Union Council of Ministers on October 17, has concluded the recording of his statement.

The court has fixed November 12 for further hearing of the case when the statements of witnesses named by Akbar will be recorded.

Akbar’s name cropped up on the social media when he was in Nigeria, as the #MeToo campaign raged on in India. Multiple women have come out with accounts of alleged sexual harassment by him when he was a journalist.

Akbar had termed the allegations “false, fabricated and deeply distressing” and said he was taking appropriate legal action against them.

Expressing her readiness to fight the defamation allegations, Ramani had said, “Rather than engage with the serious allegations that many women have made against him, he seeks to silence them through intimidation and harassment.”

Akbar’s plea had listed alleged defamatory imputations made by Ramani on the social media and also referred to his “long and illustrious” career as a journalist while terming the allegations of Ramani as a “figment of her imagination”.

It had termed as “scandalous” the allegations made by Ramani and said the “very tone and tenor” are “ex-facie defamatory”.

The plea said they have not only damaged his goodwill and reputation in his social circle but also affected Akbar’s reputation in “the community, friends, family and colleagues” and caused “irreparable loss” and “tremendous distress”.

It had claimed that the woman journalist, while putting forward the allegations relating to incidents which allegedly occurred 20 years ago, “intentionally put forward malicious, fabricated, and salacious imputations to harm the reputation of the complainant”.

Section 500 of the IPC provides for the sentence for the offence of defamation and an accused may be awarded two-year jail term or fine or both in the event of conviction.