Shiromani Akali Dal leader and Delhi Sikh Gurdwara Management Committee chief Manjinder Singh Sirsa joined the Bharatiya Janata Party in New Delhi on Wednesday ahead of the upcoming assembly elections in Punjab, in what is being seen as the ruling party's efforts to woo Sikh voters. 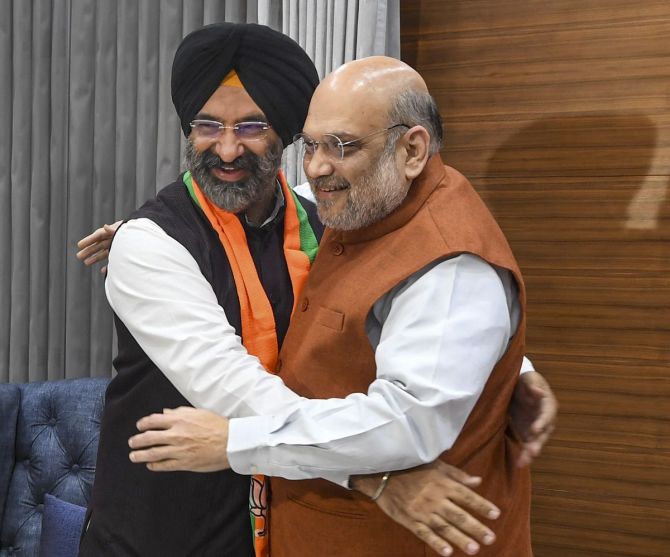 He joined the BJP in the presence of senior party leaders and Union ministers Dharmendra Pradhan and Gajendra Singh Shekhawat and later met Home Minister Amit Shah and party president J P Nadda, signifying the importance the party attached to his induction.

Sirsa has been a prominent face of the Akali Dal in the national capital and was a strong supporter of the farmers' protests against the three contentious farm laws. He said he will continue to work for Sikh causes.

In October last year he had joined the Congress after leaving SAD. Brar had headed the IT wing of the SAD and was instrumental in the party's campaigns in the previous elections.

Extending him a warm welcome, Shah said Sirsa has expressed trust in the BJP's commitment to the Sikh community's welfare under Prime Minister Narendra Modi's leadership.

"I am sure his joining the party will further strengthen this resolve," he said.

Nadda said, "I am sure his experience and hard work will further strengthen the BJP."

Shekhawat, who is the BJP's in-charge for Punjab assembly polls, said Sirsa's induction will definitely be helpful for it in the state elections, due early next year.

Parliament recently passed a bill to annul the three laws in what has been seen as the BJP's effort to placate the protesting farmers, a large number of whom are Sikhs from Punjab.

After joining the party, Sirsa told the media, "I have always raised my voice for the issues related to Sikhs. I had a chat with Home Minister Amit Shah ji with regard to issues concerning Sikhs across the country. I am happy that not only did he talk to me but said that he wants to solve these issues and will raise them with the Prime Minister as well."

Pradhan said the BJP will be strengthened with Sirsa's induction and added that he had quit his position in the DSGMC before joining the party.

Before joining the BJP, Sirsa in a tweet announced his resignation from the Delhi Sikh Gurdwara Management Committee (DSGMC).

'With gratitude to all office bearers, members, staff and people who worked with me; I am resigning from Delhi Sikh Gurudwara Management Committee as President. I will not contest upcoming DSGMC internal elections. My commitment to serve my community, humanity & nation remains same,' Sirsa tweeted.

"I am joining the BJP for my community and for resolving its longstanding issues of last 70 years. I am confident all those issues will be very soon resolved. I will fight for causes of my community," Sirsa said.

Sirsa was considered a close aide of SAD chief Sukhbir Badal and was one of the party's most visible faces when it came to Sikh religion related issues.

He was at the forefront of arranging logistics for the protesting farmers at the borders of the national capital. Under his leadership, the DSGMC was running Langar Sewa at the protesting sites.

His joining the BJP and the party's expected alliance with former chief minister Amarinder Singh could brighten the saffron party's prospects in Punjab where it was being seen to be on backfoot following the year-long protests by farmers.

The Shiromani Akali Dal hit out at Sirsa accusing him 'betraying' the 'Khalsa Panth'.

'This is the continuation of Indira Gandhi tactics against Sikh qaum and one more direct assault on the religious sovereignty of the Khalsa Panth through the misuse of governmental might and the registration of false cases. Sikh Panth accepts this challenge and will meet it head on,' the SAD said in a statement.

It said that earlier a case was registered against Sirsa, SAD Delhi president Jathedar Harmeet Singh Kalka and 11 other members of the Delhi Sikh Gurdwara Management Committee, which was headed by Sirsa.

'But while all other members lived up to the traditions of the Khalsa Panth in fighting repression, it is unfortunate that Sirsa buckled under pressure and betrayed the Khalsa Panth and spirit,' it said.