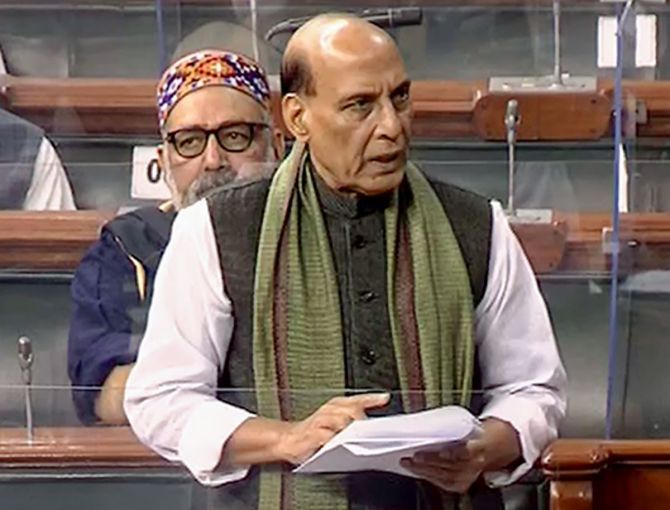 IMAGE: Defence Minister Rajnath Singh briefs the parliament on the Indian Air Force chopper crash in Tamil Nadu, in which 13 of the 14 people on board, including Chief of Defence Staff General Bipin Rawat and his wife were killed, in the Lok Sabha during the Winter Session, in New Delhi, on Thursday, December 9, 2021. Photograph: LSTV/PTI Photo

Briefing both houses of Parliament on the crash, Singh said that all efforts were being made to save Indian Air Force Group Captain Varun Singh, the lone survivor of the crash near Coonoor in Tamil Nadu on Wednesday, who was on life support at the military hospital in Wellington.

"A tri-services inquiry headed by Air Marshal Manavendra Singh has been ordered by the Indian Air Force. A team of investigators had reached Wellington yesterday (Wednesday) itself and started their work," Singh said.

Gen Rawat, India's first Chief of Defence Staff, his wife Madhulika and 11 other armed forces personnel died when the military helicopter they were travelling in crashed.

The last rites of the Chief of Defence Staff will be performed with full military honours, Singh said.

He said the last rites of the other military personnel who died in the crash will also be conducted with appropriate military honours.

The Lok Sabha and Rajya Sabha paid tributes to the departed souls by observing a moment of silence.

Giving details about the incident in the Lok Sabha, Singh said Gen Rawat was on a scheduled visit to the Defence Services Staff College at Wellington to interact with students officers.

"The Indian Air Force Mi17V5 helicopter took off from Sulur air base at 11.48 am on Wednesday which had to land at Wellington at 12.15 pm," he said. The Air Traffic Control at Sulur airbase lost contact with the helicopter at approximately 12.08 pm, the minister said.

Singh said later, a few locals reported fire in the forest near Coonoor and rushed to the spot where they saw remains of a helicopter engulfed in flames.

"All those recovered from the wreckage were immediately rushed to the military hospital at Wellington. As per information received, out of 14 persons on board the helicopter, 13 have succumbed to their injuries," Singh said.

The mortal remains will be brought to Delhi by an IAF aircraft, Singh said.

"Group Captain Varun Singh is on life support at the military hospital in Wellington and all efforts are made to save his life," Singh said.

Indian Air Force Air Chief Marshal V R Chaudhari has been sent to spot after receiving information about the accident on Wednesday itself, the Defence Minister said.

He said the Air chief has taken stock of the situation after visiting spot and the hospital.

The Defence Minister made a similar statement on the crash in the Rajya Sabha.

Speaker Om Birla expressed grief at Gen Rawat's untimely demise and said that the country had lost a skilled warrior, an outstanding strategist and an experienced leader.

In the Rajya Sabha, Deputy Chairman Harivansh paid tributes to Gen Rawat, describing him as an exceptional and distinguished military leader.

Reading out Rawat's obituary, Harivansh said the CDS had an illustrious military career spanning over four decades during which he held several important staff positions and went on to become the Chief of Army Staff on December 31, 2016.

"In the last two years, Gen Rawat tried to bring transformative reforms in the security architecture of our country," Harivansh said.

As an individual, he will always be remembered for his commitment to the nation as well as troops, he said.

"In the passing away of Gen Rawat, the country has lost an outstanding soldier and an exceptional and distinguished military leader," he said.

The House, he said, deeply mourns the passing away of Gen Rawat, his wife, and 11 others.

"The loss of precious lives is indeed painful and unfortunate," he said after which members stood in silence as a mark of respect to the memory of the departed.