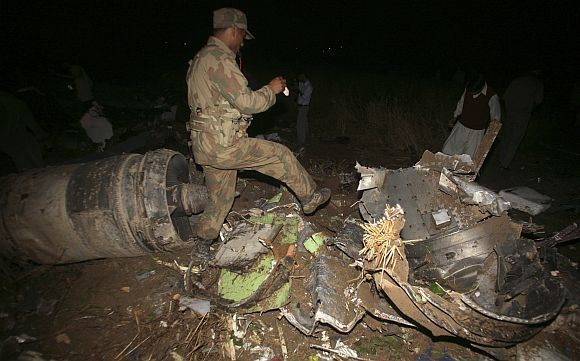 An advanced jet trainer aircraft of the Indian Air Force crashed in a paddy field at Kudarsahi in Mayurbhanj district on Wednesday, leaving two pilots injured.

The two pilots ejected themselves out of the aircraft before it crashed, an official said, adding one of the injured pilots has been identified as Sachin.

The advanced jet trainer aircraft crashed after flying for about 50 km from the Kalaikunda Air Base on a routine sortie, IAF officials said.

The reason behind the crash is yet to be known and a Court of Inquiry has been ordered by the Air Force, they said.

"We have got information that one aircraft crashed in a paddy field in a village under Bisoi Police Station area," Odisha DGP Sanjeev Marik told PTI.

Asit Panigrahi, Inspector General, northen range, said, "The accident took place between 1.20 pm and 1.30 pm. There is a logo of the Air Force in the aircraft."

He said the fire on the aircraft has been contained.

Additional District Magistrate Surath Mullick said two pilots had been traced to a place about two to three km away from the accident site. Both were found injured.

Both the pilots have been admitted to the district sadar hospital, he said.

A chopper from the Kalaikunda airbase has reached the accident spot, an official said.

Earlier on May 8, a MiG 27 aircraft had crashed near Alipurduar town in West Bengal following a technical problem.