AI brings back 489 citizens from Ukraine; private carriers step in too

Air India's two evacuation flights came from Romanian capital Bucharest and Hungarian capital Budapest to Delhi on Monday with 489 Indian nationals who were stranded in Ukraine after the Russian military offensive, officials said. 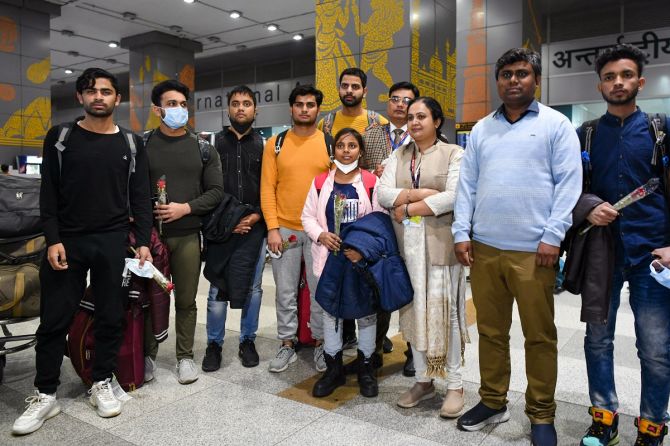 IMAGE: Indian students from Uttar Pradesh, who have been safely evacuated from Ukraine under Operation Ganga on their arrival through special Air India flight at IGI Airport, in New Delhi, February 28, 2022. Photograph: ANI Photo

Other private carriers such as SpiceJet, IndiGo and Air India Express have also sent their planes to the two cities for evacuation of Indians as the Ukraine airspace is closed

India began the evacuation of its citizens from Romania and Hungary - western neighbours of Ukraine - on Saturday and the Tata Group-owned Air India has brought back 1,396 Indian nationals in six evacuation flights till now.

On Monday, the fifth Air India flight landed in Delhi from Bucharest with 249 Indian nationals while the sixth flight arrived from Budapest here with 240 Indian nationals, the officials said.

Around 14,000 Indians, mainly college students, are currently stranded in Ukraine.

SpiceJet said it will use its Boeing 737 MAX aircraft for this special flight that will depart from Delhi on Monday evening.

“The aircraft will fly to Budapest from Delhi and the return flight will operate via Kutaisi, Georgia,” it mentioned.

SpiceJet said it is planning to operate more evacuation flights and is in discussion with the authorities concerned.

The flight will have a stopover in Kuwait for refuelling. It will land in Mumbai at 9:30 AM tomorrow (Tuesday)," it added.

IndiGo said it is operating two evacuation flights using A321 aircraft to bring back Indian citizens safely, following the crisis in Ukraine.

Both the flights will land in Delhi on Tuesday, it noted.

"These flights are being operated from Delhi to Bucharest, Romania and to Budapest, Hungary via Istanbul, today, as part of the Indian government's Operation Ganga mission," it mentioned.

India's largest airline said it is closely liaising with the government to offer its support for more such evacuations flights.

The Indian Embassy in Ukraine stated on Monday that the weekend curfew has been lifted in Kyiv and all students are advised to make their way to the railway station for onward journey to the western parts of the country.

"We expect delays in trains' schedule, even cancellation at times and long queues," it mentioned.

Be mindful of your belongings at all times, it advised.

"Ukrainians - both civilians and authorities - have been remarkably supportive in facilitating evacuation efforts of Indian citizens, especially considering these critical and dangerous times. You are all requested to respect this sentiment," it noted. 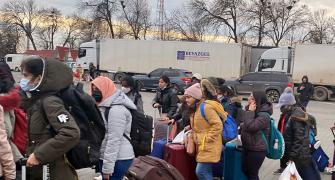 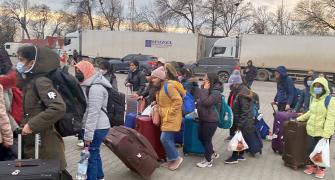 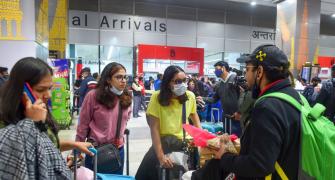 'We are safe now, but others stranded in Ukraine not' 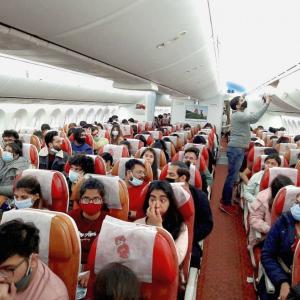 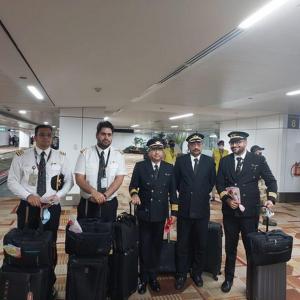