Ahmed Patel's sleepless night and other stories from Burari

A senior leader suggested that it could signify a change in the party's approach on the issue as well as send the signal that they wanted to link it to grass roots of the country and spread the benefits far and wide.

Joshi himself did an excellent job of presenting the resolution in what was clearly in layman's language, so that the delegates could receive the message loud and clear. He said it was very well for the prime minister and other ministers and the government to bring in policies, programmes and schemes but unless the congress workers were involved and unless their mindset was changed, the policies would not be effectively disseminated amongst the people nor would they be successful. Laying a great deal of emphasis on the need to involve partymen in the government's initiatives and ideas, he said both the party and the government would need to look at this issue afresh.

One man who was obviously unhappy at the decision to field Dr Joshi was Home Minister P Chidambaram, who was earlier the finance minister. He was overheard telling people that he should have been chosen since he was face of the economy and had spent years as the finance minister.

Chidambaram did speak on the resolution later and as always did a good job. But some ministers sitting there found it strange that he was telling the prime minister and Sonia Gandhi what they should do in the next 10 years and some said it sounded almost like a dictation!

Political secretary to Congress president Sonia Gandhi, Ahmed Patel was furious on Sunday night. Some leaders said they had never seen him so angry. He had been bombarded by complaints from the media and partymen over the shoddy arrangements for food and toilets at Burari during the first day of the session. He spent half the night in pulling up ministers in the Delhi government and party leaders while chief minister Sheila Dixit spent the remainder of the night in making alternative arrangements so that the problems of day one could be rectified.

The caterer was changed at 4 in the morning with the party bringing back the man who had provided food at the Talkatora stadium,  just a month ago, different delhi leaders were put on the job of managing the various venues, senior leaders were put in charge of toilets, strict instructions were given all around and by the end of it the food and the management was much better on the second day.

The problem was apparently the huge infighting between the Delhi government ministers and the men in the party who had not been involved since the ministers had the bulk of the responsibility, which they failed to deliver. The mike and audio system at the venue failed a number of times and by night the contractor was sacked and a new man brought in.  The second day saw the mikes working perfectly.

So when Sonia Gandhi talks of co-ordination between the party and the government she should look just beneath her nose and will find all she needs to know right here in Delhi!

While angry delegates from Bihar made their presence felt on day one by disturbing the plenary proceedings and demanding action against AICC general secretary Mukul Wasnik, day two began by the Bihar

contingent distributing pamphlets denouncing Wasnik and three others ,Imran Kidwai, Sagar Raika and Askok Ram. The delegates wanted a CBI probe and and prompt action against these people.

Seventeen delegates from Bihar, all AICC members managed to get an audience with Sonia Gandhi and after they explained the basis of their complaints against Mukul Wasnik, she promised that she would speak to him and get to the bottom of the matter. She is reported to have told the delegates that she understands their anger and pain and feels that the situation in Bihar was not so bad for the Congress as the final result showed

Mukul Wasnik has the protection of a number of senior leaders in the AICC and the overall feeling is that if the congress president is actually able to do anything it would be a significant development since she is not known for taking action against the guilty but has showed a status quo approach to matters of the party.

An interesting fall out of this was that not a single AICC or PCC member from Bihar was called to speak. The last speaker was AICC spokesman Shakeel Ahmed who is from Bihar but the state's delegates said he did not count as he is already a part of the AICC!

Even though the tradition in the plenary is to call AICC and PCC members to speak, this time around, the party leadership mostly asked ministers, MPs and spokesmen to speak with very few of the others getting a chance to make their voice heard.

One exception who took the bull by the horn and was appreciated all around was the young minister from Madhya Pradesh, Jyotiraditya Scindia. He made a hard hitting speech. He said ticket seekers should not have to do a ganesh parikrama of senior leaders in Delhi to get tickets.

He said in opposition-ruled states the workers were often arrested under IPC 307 and it was the responsibility of senior leaders and ministers to visit them in jail and to show solidarity and unity with them.

After he came back to his seat in from of the dais, Rahul Gandhi came down to congratulate him and then spent more than half an hour chatting with him. Others also came to show their appreciation including P Chidambaram who did not sit on the dais but sat in the seats for the ministers. His pass for the dais had not reached him in time and even though he was asked to come up he refused to do so and continued to sit through the proceedings. 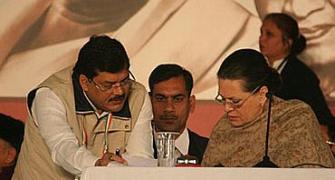 One-third of AICC members should be women: Sonia 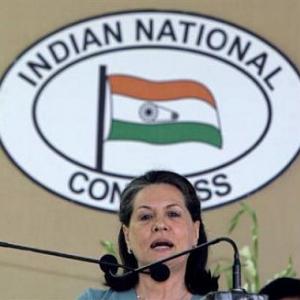 Congress party is searching for a big bang idea