Uttar Pradesh Chief Minister Yogi Adityanath on Sunday inducted Jitin Prasada and six others into his Council of Ministers, attempting to balance caste and regional aspirations ahead of the assembly polls early next year. 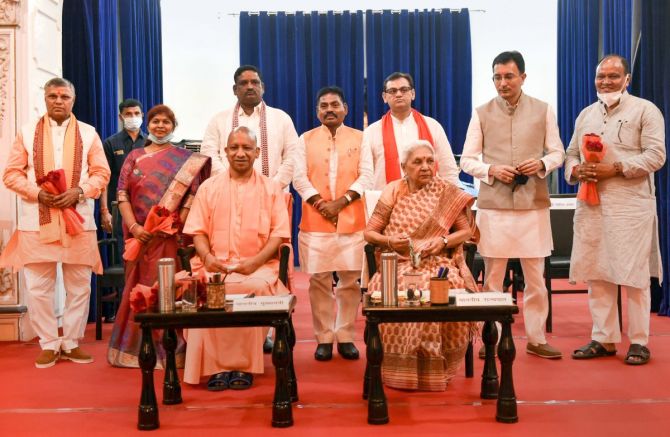 Prasada, who had crossed over to the Bharatiya janata Party from the Congress in June, was administered oath as cabinet minister, while six others were sworn in as Ministers of State.

Uttar Pradesh Governor Anandiben Patel administered oath to the new ministers at the Gandhi Auditorium in the Raj Bhawan in the presence of the chief minister.

With the latest inductions, the constitutional limit of having a maximum of 60 ministers in the state has been reached.

In a tweet in Hindi, Adityanath said, "Today's Cabinet expansion reflects the philosophy of Deendayal Upadhyay. Today's expansion is motivated by the intention to give representation to every section, feeling of social balance, message of harmony and giving opportunity to the last man of the society."

"Congratulations to all the new members of the council of ministers. (I) have full confidence that your energy, commitment, experience and pro-people attitude will help to fulfil the pledge of 'Antyodaya'. Best wishes to all of you for a bright tenure," he said.

Among the new ministers, Prasada is the lone Brahmin face, while Dinesh Khatik and Paltu Ram are Scheduled Castes and Sanjeev Kumar is Scheduled Tribe.

Former Union minister Prasada, who hails from Shahjahanpur, is all set to become a member of the Uttar Pradesh Legislative Council with the UP government sending his name to UP Governor for approval, an official said.

Besides him, the names of Sanjay Nishad, who heads NISHAD (Nirbal Indian Shosit Hamara Aam Dal) party, Chaudhary Virendra Singh Gujjar and Gopal Anjan Bhurji have been recommended as nominated members of the Legislative Council, he added.

It is believed that Prasada's induction was part of the party's efforts to woo Brahmin community, which accounts for around 13 per cent of the state's population.

Son of veteran Congress leader Jitendra Prasada who had unsuccessfully contested against Sonia Gandhi for the post of Congress president, Jitin Prasada is the second prominent close associate of Rahul Gandhi to say goodbye to the party. Union minister Jyotiraditya Scindia had earlier switched over to the BJP from the Congress.

Sangeet Balwant is the MLA from Ghazipur, Chhatrapal Singh Gangwar from Baheri in Bareilly district, Paltu Ram from Balrampur, Dinesh Khatik from Hastinapur and Sanjeev Kumar is the MLA from Obra in Sonbhadra district.

Dharamveer Singh is a member of the Legislative Council and hails from Agra.

This is the second expansion of the Council of Ministers headed by Adityanath. The first expansion took place in August 2019.

The Suheldev Bharatiya Samaj Party had contested the 2017 assembly polls in alliance with the BJP and won four seats, but later walked out of the alliance in 2019.

On Friday, Union minister and BJP's in charge for UP Dharmendra Pradhan had announced a tie-up with the NISHAD party for the 2022 assembly election.

The Sunday cabinet expansion comes close on the heels of induction of seven ministers from UP in the Union Council of Ministers in July with an eye on next year's assembly polls in the state. All seven were of Ministers of State rank.

Speaking to reporters after the swearing-in ceremony, Jitin Prasada said, "I thank Prime Minister, BJP chief J P Nadda, Union Home Minister Amit Shah and Chief Minister Yogi Adityanath, who reposed faith in me, and I will try to meet their expectations."

"This is a matter of honour for me personally, and my endeavour will be that we form the government in Uttar Pradesh under the leadership of Prime Minister and Chief Minister, and win the confidence of the people."

Sunday's cabinet expansion in UP reinforces the fact that BJP is wooing the non-Yadav backward castes ahead of the 2022 general elections in the state.

Reacting to the expansion, Samajwadi Party chief Akhilesh Yadav in a tweet in Hindi said, "The expansion of Council of Ministers in the BJP government is an eyewash. Those whose rights have been killed for four-and-half years, a drama is being enacted to give them representation. By the time the colours of the nameplates of new ministers eventually dry, the model code of conduct for the 2022 UP Assembly election will be implemented."

BSP chief Mayawati in a tweet highlighted how the chief minister recently skipped the prefix Gujjar while unveiling a statue of ninth century ruler Mihir Bhoj in Dadri.

Taking a swipe at Adityanath, Aam Aadmi Party leader Sanjay Singh said the ministers have been inducted on a three-month "contract" before the election code of conduct comes into force in December and asked why only Dalits and backwards are treated in such a manner.