Source: PTI
March 27, 2011 18:18 IST
President Asif Ali Zardari on Sunday remitted the remaining jail term of Indian convict Gopal Das, who has been imprisoned in Pakistan for 27 years, days ahead of a visit to India by Prime Minister Yousuf Raza Gilani to watch the cricket World Cup semi-final featuring the teams of the two countries.

Zardari remitted the remaining prison term of Das "on humanitarian grounds", presidential spokesman Farhatullah Babar said. The remission was granted on the advice of Gilani to "honour an appeal of the Supreme Court of India to the government of Pakistan", he said.

A two-judge bench of the Indian Supreme Court had appealed to the Pakistan government earlier this month to remit the remaining period of Das' sentence and release him on humanitarian grounds. The court made the appeal in response to a petition filed by Das' brother Anand Vir.

Babar noted that Indian media reports had mentioned that the Indian judges had resorted to the "unusual step" of appealing to Pakistan to consider granting remission to Das on humanitarian grounds. He also pointed out that Justice Markandey Katju had, in his judgment, quoted a couplet by Faiz, "Qafas uddas hai yaaro sabaa se kuch to kaho, Kaheen to beher-e-khuda aaj zikr-e-yaar chale."

Das' family has said that he was arrested by Pakistani security forces when he mistakenly crossed the border in July 1984. According to official records, Das was sentenced to life imprisonment in June 1987 and was set to be released by the end of this year. However, acting on the advice of the Pakistani PM, Zardari remitted Das' remaining term, Babar said.

"The president signed the remission advice in the wee hours of Sunday, soon after the invitation of Prime Minister Manmohan Singh was accepted and it was decided that Prime Minister Yousuf Raza Gilani will proceed to Mohali to witness the semi-final cricket match between the teams of the two countries," Babar said.

The home and interior secretaries of India and Pakistan will meet in New Delhi on Monday for the first in a series of meetings under the umbrella of the "full spectrum of dialogue" between the two countries.

Monday's meeting will mark the formal resumption of the bilateral peace process that was stalled in the wake of the 2008 Mumbai attacks, which were blamed on the Pakistan-based Lashkar-e-Tayiba.

Source: PTI© Copyright 2020 PTI. All rights reserved. Republication or redistribution of PTI content, including by framing or similar means, is expressly prohibited without the prior written consent.
Related News: Yousuf Raza Gilani, Asif Ali Zardari, Farhatullah Babar, Gopal Das, Pakistan
SHARE THIS STORY
Print this article
Don't talk to Pakistan for the sake of talking
The sad part about peace with Pakistan
What resumption of talks with Pak means for India 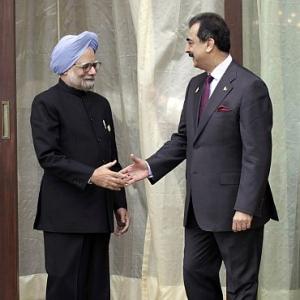