In anticipation of the Supreme Court verdict in the Ayodhya land dispute case, the Vishwa Hindu Parishad has stopped stone carving work for the construction of a Ram Temple in Ayodhya for the first time since 1990. 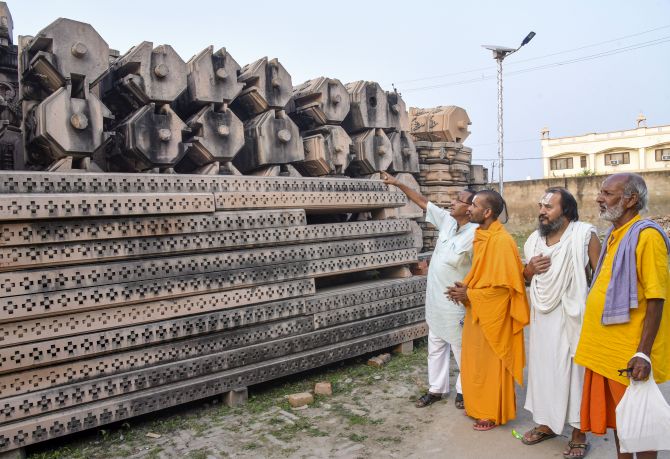 He said the decision to stop the carving has been taken by top leaders of the VHP, a Hindu right-wing organization that has been at the forefront of the movement demanding the construction of a 'grand temple' dedicated to Lord Ram at the site of the demolished Babri Masjid.

The Supreme Court is expected to announce its verdict in the Ram Janmabhoomi-Babri Masjid demolition case by November 17, the day of retirement of Chief Justice of India Ranjan Gogoi who heads the five-judge bench that heard arguments in the case.

"We have stopped the carving of stones and the Ram Janmabhoomi Nyas will decide when the carving will be restarted," Sharma said.

"All our proposed programmes regarding different activities of our outfits have been cancelled keeping in view the upcoming Ayodhya verdict," he said.

The carving of stones for the construction of a Ram Temple was started by the VHP at the Ram Mandir Nirmaan Karyashala in Ayodhya in 1990 when Mulayam Singh Yadav of the Samajwadi Party was Uttar Pradesh chief minister.

The carving work by artisans had been carried out uninterrupted since then.

According to the VHP, 1.25 lakh cubic foot of stone has already been carved.

The organization claims that stone work sufficient for the first floor of the proposed temple is ready and that 1.75 lakh cubic foot stone for the rest of the structure is still to be carved.

Ahead of the judgement on the contentious issue, the VHP has also appealed to its cadres to remain calm and restrain from creating an atmosphere of celebratory frenzy.

In a letter to its workers, VHP central vice-president Champat Rai said, "This (the verdict) should not be a matter of Hindus and Muslims. It is about accepting the truth. So, do not create a celebratory frenzy in society and nobody should be taunted."

He noted that arguments of lawyers in the case and observations of judges indicate that "the verdict will be in the favour of truth" and that society will rejoice over the judgement.

VHP spokesperson Sharma said, "Whether the verdict is in favour of Hindus or Muslims, it is time that both communities present great examples of harmony and brotherhood. We all have to take care that no incident which mixes venom in the cordial relations of Hindus and Muslims should take place."

The organisation's decision to stop stone carving for the proposed temple has not gone down well with some.

"When the Babri Masjid was demolished in 1992 and the RSS, VHP and all such organisations were banned for six months, even then the carving of stones was continued," said Yugal Kishore Sharan Shastry, 'mahant' of the Saryu Kunj Sita-Ram Temple in Ayodhya.

"Even during Akhilesh Yadav's regime in the state, stones from Rajasthan and Gujarat were regularly brought in," he added, describing as "shocking" the decision to stop the carving work.

Strict security measures have been put in place in Ayodhya and other parts of the state and country to ensure that law and order is maintained following the announcement of the judgement.

The local administration has imposed a ban on any event marking a "victory" or "mourning" over the judgement. Prohibitory orders under Section 144 have been clamped in Ayodhya till December 28.

Four security zones have been created in Faizabad district that will be manned by the Central Para Military Forces and the civil police.

In a series of restrictions, District Magistrate Anuj Kumar Jha has ordered against the use of social media to "insult" deities or to install idols and hold processions related to Ram Janmabhoomi.

The Ayodhya land dispute has been a controversial issue for many decades, especially since the 16th-century Babri Masjid was demolished on December 6, 1992 by 'karsevaks'. Hindu right-wing groups claim that the mosque was built on the site of the birth of Lord Ram.

The incident had sparked communal riots in different parts of the country including Mumbai.

Ahead of the verdict, Prime Minister Narendra Modi has asked his council of ministers to refrain from making unnecessary statements on the issue and maintain harmony in the country.

Religious leaders of both the Hindu and the Muslim communities have also issued statements asking people to neither resort to violence nor to celebrations after the verdict is delivered.