'I was told that Agra has never been cleaned, spruced and scrubbed like it has been for Trump!'
A tourist who visited the Taj Mahal over the the weekend gives an account of how the city is gearing up to welcome the Trump Parivar. 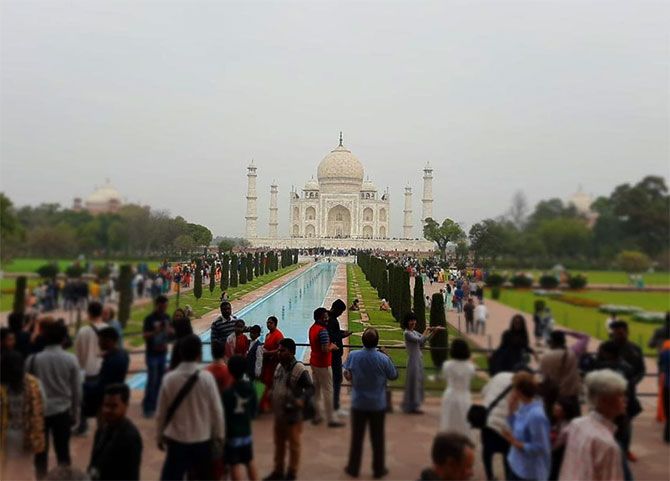 IMAGE: Crowds throng to see the Taj, a couple of days before the POTUS and FLOTUS visit. Photograph: Neeraj P

There couldn't have been a better time to be at the Taj Mahal than just three days before President Donald J Trump's visit.

"The water fountains all looked freshly scrubbed and painted blue, but there was no water coming out of the fountain. Maybe they will turn it on for President Trump," says Neeraj P who travelled from Haryana with his family to see the Taj Mahal over the long Mahashivratri weekend holiday.

Workers were filling cement in the gaps of the stone walkway leading to the monument, and there were strands of mogra flowers at the entrance near the ticket counter.

"Just as you got off the highway from Delhi, enroute to the Taj, you could see the walls being painted and roads being cleaned."

"Footpaths have been cleaned; some new ones seem to have been constructed. The Uber driver said the garbage that was perpetually lying around by the roadside has been finally cleared," adds Neeraj over the phone from Haryana on his return on Sunday.

The sides of the footpaths and road dividers bear a fresh coat of black and white paint. Flowers have been planted on the roadside and being watered. Shop signboards have been painted on the same colour and font to lend uniformity.

"Every ad hoarding seems to be covered by Mr Modi and Mr Trump's posters. I didn't see any pictures of Yogi Adityanath."

'Welcome to India's most progressive state' 'UP's 23 crore citizens welcome you' and 'The coming together of two nations' were some of the slogans on the hoardings, says Neeraj.

Contingents of security forces were being lined up and briefed in small groups on the road leading to the Taj when Neeraj visited Agra and the Taj.

Work is being done on a war footing to clean and spruce up the entire stretch that will fall in POTUS and FLOTUS's path. IMAGE: The signages on shops along the Trumps's route in Agra have been painted a similar maroon. Photograph: Neeraj P

"But the Agra resident was disappointed that instead of Trump seeing his picture on every hoarding, he felt the posters should have conveyed some information about Agra's history and what it was famous for," adds Neeraj.

"I was told that Agra has never been cleaned, spruced and scrubbed like it has been for Trump! But, of course, only those parts of the city that Trump will pass through."

Visitors were allowed to take pictures outside the monument at the Taj Mahal when Neeraj visited, but photo restrictions were in place inside the mausoleum.

Foreigners pay Rs 1,100 for a ticket, Indians Rs 250. The Super Rich Trumps, of course, will save that princely sum!