Parliament attack death row convict Afzal Guru has approached the Delhi government seeking his transfer from the Tihar jail in New Delhi to a prison in his home state of Jammu and Kashmir.

After receiving the application, the Delhi government has sent it to the Jammu and Kashmir government for its opinion.

Guru, a resident of Sopore in the Kashmir Valley, sought the transfer stating it is very difficult for his family to come to Delhi regularly to meet him. He has been lodged in Tihar jail for nearly nine years.

The official said the Delhi government will form an opinion on the issue after receiving a communication from the Jammu and Kashmir government.

"We will decide on the issue once we get the opinion of the Jammu and Kashmir government," the official said. Guru had filed the application with Superintendent of Tihar jail who forwarded it to the Delhi government.

The Delhi government last week sent its views on Guru's mercy petition file to Lieutenant Governor Tejendar Khanna with comments that it had no objection to the hanging but its implications on law and order needed to be kept in mind.

The city government's move came after the Home Ministry recently sent 16th reminder seeking its opinion on the matter.

The Delhi government has been dilly-dallying on the matter for nearly four years and the capital punishment awarded to Pakistani terrorist Ajmal Amir Kasab in the Mumbai attacks case brought the issue under fresh focus.

Guru was awarded death sentence by a Delhi court on December 18, 2002 after convicting him for attack on Parliament on December 13, 2001.

The death sentence was upheld by Delhi High Court on October 29, 2003 and his appeal was rejected by the Supreme Court two years later on August four, 2005. 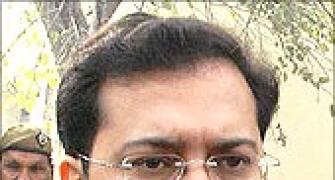 Intentions behind infiltrations in Kashmir Valley