United States President Donald Trump met Australian Prime Minister Malcolm Turnbull for a patch-up meeting and said all issues had been "worked out" after a January telephone spat between the leaders had soured ties. 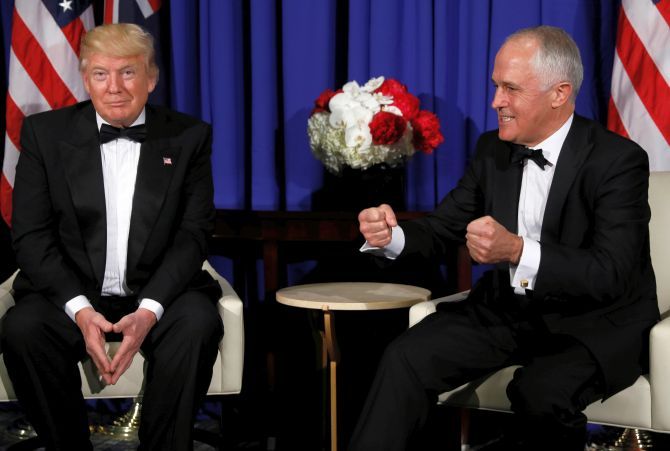 Trump said he had a "productive discussion" with Turnbull on a wide range of issues in New York after he returned to the city for the first time since taking office.

He said they discussed the future of the two countries from the perspective of national security and trade to immigration and enhanced economic cooperation.

"We affirmed the tremendous friendship between the US and Australia," Trump said, adding that the reports that they had a rough telephone call on January 28 was exaggerated.

"It's all worked out. It's been worked out for a long time," Trump said, adding, "We had a great telephone call. You guys exaggerated that call. That was a big exaggeration. We're not babies."

Trump's showering of praise came in stark contrast to what was reportedly a verbal spat between the two leaders over accepting refugees. Trump claimed the acrimonious call with Turnbull early in his White House tenure had been "fake news".

Turnbull was among the first foreign leaders with whom Trump spoke with after taking office on January 20. Trump was reportedly irritated because he was expected to honour a deal made by his predecessor Barack Obama to accept more than 1,200 refugees.

The US president had abruptly hung up the call with the Australian premier after merely 25 minutes, rather than an hour the call was supposed to last.

Last month, Vice President Mike Pence visited Australia on a fence-mending visit. Although he too made it clear that Trump was not happy with the refugee deal, the US nonetheless would honour it.

At the patch-up meeting, Trump delivered a charm offensive through his speech at an event to honour the 75th anniversary of Australian and US victory in the Battle of the Coral Sea.

Trump said for nearly a century Americans and Australians have "fought together, bled together."

"Our brave warriors have fought shoulder to shoulder in every major conflict together," he said.

"Our two nations were born as the rebellious children of the same parent. Americans have had no better friends than the Australians, I mean that," he said.

Trump thanked Australia, saying the US was "profoundly grateful" for its role to limit the conflicts in Syria, Iraq and Afghanistan.

Turnbull underscored the closeness of the two countries. "We are always more assured of winning when we are fighting together," he said.

He also supported the American stand on the North Korean issue. "Today and together we condemn and resist the reckless provocations of North Korea. We fight together in Iraq and Afghanistan to defeat and destroy the terrorists who threaten our way of life. Today Australians and Americans stand shoulder to should defending our freedoms," he said.

IMAGE: United States President Donald Trump and Australia's Prime Minister Malcolm Turnbull deliver brief remarks to reporters as they meet ahead of an event commemorating the 75th anniversary of the Battle of the Coral Sea, aboard the USS Intrepid Sea, Air and Space Museum in New York. Photograph: Jonathan Ernst/Reuters