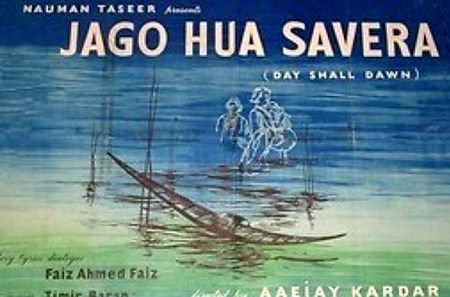 Indo-Pak tensions cast its shadow on the Mumbai International Film Festival with organisers on Monday dropping Pakistani film "Jago Hua Savera" in its retrospective section amid threats of protests at its screening.

"Given the current situation, the Jio MAMI 18th Mumbai Film Festival with Star has decided not to programme 'Jago Hua Savera' as part of the Restored Classics Section," organisers of the festival said in a statement.

The move comes after a city-based organisation Sangharsh threatened to stage protests at the screening of the movie made in 1958.

The outfit had also sought police permission to protest at the festival, which begins from October 20.

The tensions between India and Pakistan after the Uri attack last month has triggered demands in certain sections to ban artistes and films from Pakistan.

Directed by AJ Kardar, "Jago Hua Savera", which was screened in the 'Classics' section of the Cannes Film Festival this year, was co-produced during the days of undivided Pakistan (now independent Pakistan and Bangladesh) and shot in Dhaka.

It was selected as the entry from Pakistan for the Best Foreign Language Film at the 32nd Academy Awards in 1960.

Timir Baran co-composed the music with Nauman Taseer and the screenplay of the movie was penned by noted poet Faiz Ahmad Faiz, an artiste revered by people on both sides of the border.

The festival, which is chaired by filmmaker Kiran Rao, will run till October 27 and over 180 films from 54 countries would be screened at several spots across the megapolis.

Prithvi Mhaske of Sangharsh Foundation, Censor Board of Film Certification member Ashoke Pandit, filmmaker Vivek Agnihotri and actor George Baker have welcomed the decision of Mumbai Academy of Moving Image not to screen the film.

"If MAMI has decided to not screen the film, we welcome the decision, that they have understood the sentiments," Mhaske, who had filed the complaint against the organisers for screening the film at MAMI, said.

Pandit, who is also a member of Indian Motion Picture Producers Association, thanked the organisers.

"Thank you #MAMI for not showcasing any #Pakistani film in this year's edition of the Mumbai Film Festival. #JagoHuaSavera," he tweeted.

A popular actor from Bengali and Assamese cinema, Baker, said the priority right now should be the national sentiment.

"I appreciate the quality of the film, though I haven't seen it. It has travelled to festivals and won several awards. It had Indian artistes and was shot by a Pakistani.

"Keeping all this aside, we should remember that Indians are broad-minded but not stupidly disloyal to the country. If this is the national sentiment right now then it should be banned."

Agnihotri said he is against any kind of ban, but feels culture is a strong weapon to give it back to Pakistan.

"I'm absolutely against any kind of ban or boycott but at the same time I am wise enough to understand when my country has taken a strategy to isolate Pakistan it's not against a film or an actor. It's to send a message to Pakistan that if you do not stop terrorism then this is the price you will have to pay," he said.