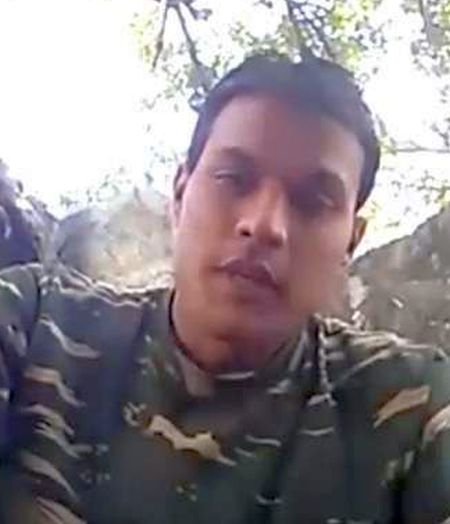 After the video of a Border Security Force man showing poor quality food being served to them on the icy border in Jammu and Kashmir drew outrage, more such clips have emerged on the social media, including those of an army jawan and a Central Reserve Police Force constable complaining about deprivation and harassment by seniors.

As the government was trying to fend off criticism on the social media about alleged ill-treatment of men in uniform posted in inhospitable places following BSF jawan Tej Bahadur Yadav’s allegations, the new videos surfaced.

A clip posted by a CRPF constable was trending in the social media in which the trooper was seen demanding parity in pay and other benefits between army and paramilitary forces, citing the difficult assignments they had to undertake.

The CRPF, the country’s largest paramilitary force, quickly stepped in and said it has taken ‘cognisance’ of the issues raised by the jawan, who identified himself in the video as Jeet Singh.

“This is an old video. The jawan has service-related grievances and is seeking parity in pay and other benefits. An Inspector General rank officer of the force has already got in touch with him. We have made it clear that if there are any problems to the troops, we will address them immediately,” CRPF Director General K Durga Prasad said.

Another video showed Lance Naik Y P Singh alleging ‘abuse’ by his senior officers who often threatened him that he would lose his job if he did not follow their orders which included polishing their shoes.

In the video Lance Naik Yagya Pratap Singh, posted in 42 Infantry Brigade in Dehradun, said after writing the letter to the PM, the defence minister, the President and to the Supreme Court in June last year, his brigade received a communication from the PMO asking it to investigate his greviances.

Singh claimed that instead, his superiors in the Brigade started harassing him and also initiated an enquiry, which could result in his court-martial.

“I had just written an application to the PM in which I had just said that soldiers, who act as sahayaks, should not be allowed to polish shoes of officers. When the PMO wrote a letter asking the Brigade to investigate into the matter, the Brigadier...everyone put pressure on me and tortured me to such a level that I could have taken an extreme step. But I will not committee suicide or act in any way or against anyone that will tarnish the name of my service,” he said.

Meanwhile, the CRPF DG a said this trend of airing grievances was ‘not the healthiest and correct’ way and there was a need for the officers to interact more with personnel to ensure that they remain in contact with them to avoid such incidents.

“It is not a good thing to bring out these issues through the social media. It is not the healthiest way of doing things. It is like if you don’t get anything, you go and do this. Use of social media for this purpose is wrong as they (troops) have various forums for grievance redressal.

“Having said that, I will add and ask my senior officers to take further efforts to engage with the personnel more often and ensure that they remain in contact with them much more than they are now,” Prasad said.

He said in any situation, whether there is a ‘video or no video’, the efforts to ensure welfare and other benefits for the men and women of the force is an ‘ongoing effort’.

“What my jawan has said in the video is about the facilities that he wants to get on par with other forces like army when he takes similar risks. We have already brought these issues to the notice of the 7th Pay Commission and the government,” he said.

Prasad further said that the force, beginning October last year, has started issuing an e-letter that reaches every jawan in the force, informing them about what all was being done for them by the government and the force headquarters in Delhi.

“We have also requested to the government that the pension system of these men, which was stopped in 2004, should be introduced again,” he said.