News
Business
Movies
Sports
Cricket
Get Ahead
Money Tips
Shopping
Sign in  |  Create a Rediffmail account
Rediff.com  » News » AFSPA may soon be withdrawn from some areas in J&K: Omar

AFSPA may soon be withdrawn from some areas in J&K: Omar

The controversial Armed Forces Special Powers Act may soon be withdrawn from some parts of Jammu and Kashmir as Chief Minister Omar Abdullah on Tuesday briefed Union Home Minister P Chidambaram about the improved security situation in the state.

Emerging from an hour-long meeting with Chidambaram, Omar told mediapersons that he had a meeting with the home minister to have a "comprehensive review" of the security situation in the state.

"During the meeting, we also discussed the possibility of removal of AFSPA and Disturbed Areas Act from certain parts of the state. I will return and have a discussion with my cabinet colleagues and officers, after which we can take a decision," Omar told mediapersons in New Delhi.

He, however, cautioned this did not mean that there "will be an overnight revocation of AFSPA or Disturbed Areas Act from the entire state."

"We have to see the areas where the footprints of army were minimal and then go for revocation of Disturbed Areas Act and subsequently AFSPA," the CM said.

About a question on the Kashmir interlocutors submitting their final report, Omar said "it was indeed a step in the right direction and after this I hope that the Centre will soon convene an all-party meeting to discuss it."

"I look forward to the report. I hope positive things come out and are implemented," he said.

The three-member panel -- Dilip Padgaonkar, Radha Kumar and M M Ansari -- will submit their report to the home minister on Wednesday. 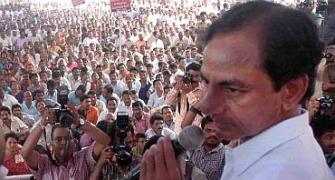 We only want Omar to step down, clarifies Mehbooba

Wherever BJP gets majority, it takes fascist steps: Digvijay