The implications of the withdrawal of American troops on the security situation in Afghanistan and the need for sustained pressure on Pakistan on terror financing and terrorist safe havens will be on the agenda of talks during US Secretary of State Antony Blinken's two-day visit to India from July 27, official sources said on Sunday. In the discussions, India will press for gradual resumption of international travel while maintaining health protocols, and will particularly seek easing movements of students, professionals and business travellers among others, they said.

India will continue to push for ensuring open and consistent supply chains for materials and items required for the production of coronavirus vaccines as it ramps up the manufacturing for domestic and global supplies thereafter, the sources said.

The two sides are also expected to explore ways to deepen defence collaboration, including exercises, defence transfers and technologies ahead of the next edition of the 2+2 defence and foreign ministerial dialogue to be held in the US later this year, they said.

Discussions on deepening engagement in the Indo-Pacific region under the Quad or Quadrilateral coalition will be another key focus area of talks with the possibility of a meeting of foreign ministers of India, the US, Australia, Japan later this year.

The fast-evolving situation in Afghanistan is likely to be one of the main areas of discussions between Blinken and Indian leaders as his visit comes amid a massive spike in violence in that country, triggering increasing global concerns.

"On the regional security situation, implications of the withdrawal of US forces from Afghanistan and the need for sustained pressure on Pakistan on terror financing and terror havens will be part of the agenda," said a source.

The visit will be an opportunity to further consolidate bilateral cooperation across a vast agenda, the sources said.

They said issues like augmenting trade and investment, and tapping opportunities in healthcare, education, digital domain, innovation and security will be important elements of the conversation between the two sides.

"India attaches considerable importance to the visit of Secretary Blinken and is looking to taking forward the conversation with the US on numerous issues, be it bilateral, regional, addressing COVID or global developments," the source cited above said.

Referring to COVID-19, the sources said the discussions will cover containment as well as recovery efforts.

"India will press for a gradual resumption of international travel, while maintaining health protocols, especially easing the mobility of students, professionals, business travellers, family reunions, humanitarian cases, etc. The need for resilient supply chains of critical medicines and healthcare equipment is likely to come up," the source said.

"On vaccines, India will continue to push for ensuring open and consistent supply chains for materials and items required for vaccine production, as India ramps up both for domestic vaccination and as for global supplies thereafter," it said.

The sources said the two sides will also exchange assessments about the Indo-Pacific region, with a focus on COVID-19 assistance, economic slowdown and security scenario.

Latest developments pertaining to West Asia and Central Asia are also likely to be covered.

Climate change remains an important area of the conversation, particularly the potential for green collaborations as well as climate finance and transfer of clean technologies to developing countries, they said.

"India will also engage with the US on other global issues. Political and cultural rebalancing are important trends. India supports a truly multipolar, democratic and diverse world order and expects international conversations to reflect this evolution," the source said.

"We believe in equity and fairness, whether in development, climate change or global decision-making," it added.

Discussions are also likely to cover working together in the UN, especially with India holding the Presidency of the UN Security Council in August.

It will be Blinken's first visit to India after assuming charge as the US Secretary of State and the third by a high-ranking Biden administration official after it came to power in January.

Secretary Blinken's visit reciprocates the visit by External Affairs Minister S Jaishankar to the US in May. 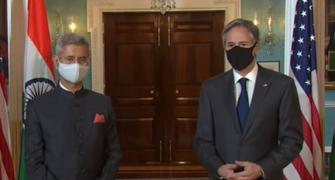