Bharatiya Janata Party's internal problems showed no signs of ebbing with senior leader L K Advani and Sushma Swaraj on Friday skipping a public meeting in Mumbai as Gujarat Chief Minister Narendra Modi appeared to be strengthening his grip over it.

Advani and Swaraj decided not to attend the customary meeting that followed the two-day national executive paved the way for a second term to incumbent President Nitin Gakari, who had extracted the resignation of Sanjay Joshi at the instance of Modi.

However, BJP spokespersons sought to downplay their absence saying the two had pre-scheduled engagements to meet and their absence was known well in advance.

Like Modi's threatened absence and his lifting of the boycott later in the evening yesterday after announcement of Joshi's resignation on Thursday morning, the absence of Advani and Sushma dominated Friday's show.

Their absence was seen as a sign of their sulk over the second term for Gadkari, which said to be at the instance of the Rashtriya Swayamsevak Sangh, and the apparent growing influence of Modi.

However, the meeting saw the presence of former Karnataka CM B S Yeddyurappa, who has his own litany of problems with the party leadership and who had earlier announced that he would not attend the meeting.

Modi and Gadkari are set to be the star speakers at the rally with a senior leader remarking that their bonhomie has upset other senior leaders, including Advani and Swaraj.

With Gadkari smoking the peace pipe with Modi on Thursday, the equations in the BJP appear to be undergoing a change and leaders are considering the way ahead in the changed scenario.

The absence of Advani and Swaraj at the rally is also being seen in this backdrop.

Interestingly, Advani was not present on Thursday at the national executive when the resolution to amend the party constitution to allow a second term to Gadkari was passed. Party leaders said that the BJP veteran had gone to meet an ailing relative in the city.

BJP spokespersons were at pains to explain the absence of Advani and Swaraj. "Advani's schedule was fixed earlier so he won't be there and Swaraj has to attend a programme in Ghaziabad on Saturday morning," party spokesperson Nirmala Sitharaman said.

During separate briefings, BJP leaders Gopinath Munde and Ravi Shankar Prasad sought to project a united picture saying that the party had announced earlier that Advani would not be present at the rally and, therefore, nothing should be read into the absence.

But when asked would it not be proper that an image of the united BJP would have gone around if the party's top brass would have been on one stage at the rally, Prasad merely said there could be more such programmes.

Munde, who had not been on the best of terms with Gadkari, insisted that he as also Murli Manohar Joshi and Advani support the resolution seeking to give a consecutive three-year term to the BJP President.

Prasad, as also party spokesperson Shahnawaz Hussain, hailed the outcome of the meeting saying it has boosted the confidence of the party.

Participating in the discussion on the political resolution, Swaraj underlined the need for greater co-ordination between Parliamentary wing and the organisational wing of the party for launching a decisive battle ahead.

Replying to several questions on whether a decision has been taken to include Chief Ministers in party's Parliamentary Board Munde, Prasad and Hussain said the issue did not come up for deliberations and till Gadkari's present term ends in December, no changes were expected.

However, in reply to a similar question later, Prasad said that the President has discretionary powers to include people. 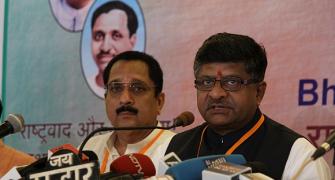 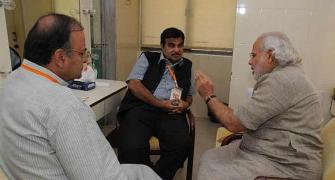 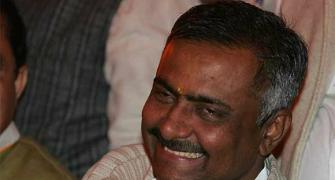 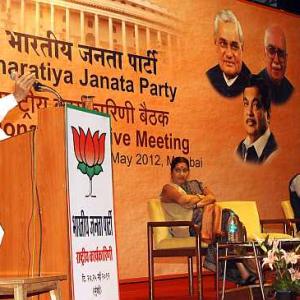 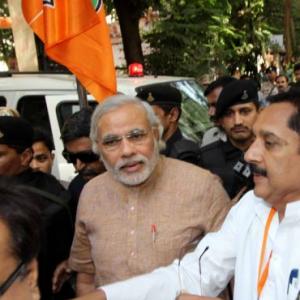