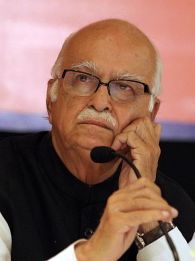 Opposed to Narendra Modi's elevation in the party, senior Bharatiya Janata Party leader L K Advani on Saturday stayed away from the national executive which looks set to make the Gujarat chief minister the chief of campaign committee.

85-year-old Advani skipped the BJP national executive, perhaps for the first time in the party's history, apparently to express his opposition to making Modi the campaign committee chief, which will in effect present him as the face of the party for the next general elections.

Advani cited ill health as the reason for his staying away from the two-day conclave which began in Panaji on Saturday, party sources said.

Meanwhile, BJP spokesperson Prakash Javadekar has stated that Advani will not attend the national executive meet on Sunday as he had been advised rest by the doctors.

However, the sources said the party is keen to make the announcement about Modi at the national executive and the Rashtriya Swayamsevak Sangh has given its go-ahead to it.

"Whether Advani is there at the meeting or not, the announcement about Modi is likely," at least two senior party leaders said.

Some sources said the announcement could come even as early as today.

There is a possibility of senior leader Sushma Swaraj, considered close to Advani, and others raising objections to announcement about Modi's role in the absence of Advani.

The earlier concern that making such an important announcement in the absence of Advani and several other leaders, most of whom have cited sickness as the reason, would wean away the sanctity of the measure has now been set aside, the sources said.

Even the RSS is now said to be of the view that the party should go ahead with the announcement without further delay. Modi's role in the next general elections to be held in 2014 has divided BJP some pushing for him, others close to Advani opposing him.

Commenting on the report that some senior BJP leaders had opted to skip the party’s national executive meeting in Goa Javadekar said, "I would hope that whoever is ill recuperates soon. Politics aside, personally, we wish everyone is healthy”.

Insisting that not much should be read into this issue, he said Advani would have loved to be present at the conclave.

BJP spokesperson Shahnawaz Hussain said Advani is indisposed and hence, he has not been able to attend the meeting.

National executive member Nalin Kohli said BJP is different from the Congress and does not have camps. He said BJP is deliberating upon the plans to replace the UPA government in the next elections as people are fed up of the corruption, scams and lack of governance in the Congress-led regime.