Advani says he will take yatra to Bengaluru

Contrary to speculation that he was cancelling his yatra to Bengaluru in the wake of the arrest of B S Yeddyurappa, Bharatiya Janata Party leader L K Advani on Sunday said his visit to the city is on schedule.

"I have no information about my yatra in Bengaluru getting cancelled," Advani said when asked if his plans in Karnataka had changed following the arrest of former BJP chief minister Yedduyurappa. "I will go to Karnataka and also go to Bengaluru," Advani said.

To another question on Yedduurappa, Advani said that he did not want to make further comments on Yedduyurapa except what he had said earlier in Nagpur.

Party sources had on Saturday said the October 30 public rally of L K Advani in Bengaluru as part of his yatra against corruption has been been cancelled. However, the sources had said that Advani would visit coastal parts of the state like Mangalore, Udupi and Honnavara on October 31.

The sources had said that the BJP decided against holding public meeting in Bengaluru apparently in the light of recent developments that have embarrassed the party with former chief minister Yeddyurappa and another former minister S N Krishnaiah Setty sent to jail in cases relating to alleged land scams.

A Lokayukta court on Thursday directed the Lokayukta police to investigate a private complaint filed against Home Minister R Ashoka, regarding alleged denotification of land in violation of rules.

To a question related to formation of new states, Advani said the BJP was in favour of the formation of Telangana even at the time it was in power.

Advani stressed that if the government took a decision on the formation of Telangana, his party would extend support. He also said that his party was not in favour of the Communal Violence Bill and noted that in the chief ministers' meet even Congress chief ministers had not backed that bill.

"This fact has not been recognised that Naxalites are not there just because of backwardness or poverty. The Naxals are against democracy and constitution and aspire to capture power. Those who die fighting Naxals actually die protecting democracy and constitution. Uncertain policy towards Naxals can be dangerous. Naxalism started in West Bengal and only ended because of firm policy," he said.

Advani also attacked Home Minister Chidambaram stating, "His role should also be investigated under the supervision of the Supreme Court in the 2 G Spectrum case. The Central government because of various scandals is in a condition of paralysis." Is Advani out of the race for PM's post? Not yet! 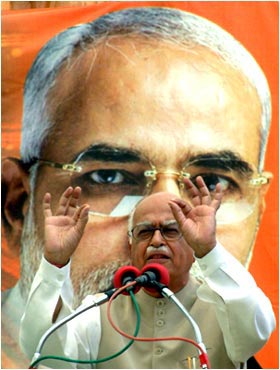 Is Advani's yatra his last attempt at prime ministership? 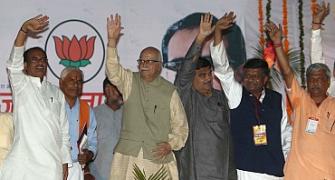 A behind the scenes look at Advani's rath yatra