Advani on why BJP lost the Lok Sabha polls

Public perception that the Bharatiya Janata Party was 'not a united house' disillusioned its supporters and was a major factor behind the party's disappointing result in the Lok Sabha polls, senior leader L K Advani said on Friday.

"In my view, no factor hurt us more in the last Parliamentary elections than the public image that the BJP was not a united house. Not only were the people at large, but even our own supporters disillusioned," he said in his concluding remarks at the party's National Council in Indore.

Advani emphasised on regaining unity and discipline within the party, which were its 'traditional strength'. He insisted that the 2009 poll verdict was not a positive mandate in favour of the previous United Progressive Alliance government's performance.

"Looking back, it is clear that people's concern for political stability, coupled with their disillusionment with the goings on in the BJP, overshadowed their general disappointment with the UPA government's performance," he said.

Despite the Rashtriya Swayamsevak Sangh and the National Democratic Alliance endorsing Advani as the prime ministerial candidate in the 2009 Lok Sabha elections, in-fighting over running of the poll campaign and bickering over ticket distribution between his camp and the other led by then BJP president Rajnath Singh had adversely impacted the party's performance.

The differences came out in the open after the poll debacle, which saw BJP's strength falling from 138 to 116 seats, and its leaders playing the blame game through the media.

However, Advani said as a mature party, the BJP should take the electoral defeat in its stride and forge ahead after learning lessons from the outcome.

"The first lesson, of course, is that there is no need for despair or despondency. Winning and losing is a part of democracy," he said.

Advani also gave constructive suggestions to his party cadre on how to tread the road ahead for the 2014 elections.

"Gadkari was absolutely right in saying that individual ambitions must always be subservient to the party's goals and party's decisions," he said, alluding to the infighting among the second-rung BJP leaders, who fought bitterly for supremacy in the party.

Advani asserted that the people should know that the BJP is superior to the Congress in providing good governance, promoting clean politics and accelerating pro-poor development. "It means that the performance of our state governments is of critical importance," he added.

"Our geographical and social base needs to expand. Stagnation in some states, partial erosion in certain traditional strongholds, and virtual absence in some big states has served as a severe constraint on our political strategy," Advani said.

"His (Gadkari's) team, I am sure, will feature several persons from the fourth generation of leadership. Simultaneously, the party is spotting and grooming the most promising activists and leaders who are younger," he said.

The party has been making efforts to counter the challenge of Congress leader Rahul Gandhi, who is said to be attracting the youth to his party.

Advani praised Gadkari and said his election proves that the BJP is committed to development-focused politics and governance.

He also took a dig at the Congress for perpetuating dynastic rule. 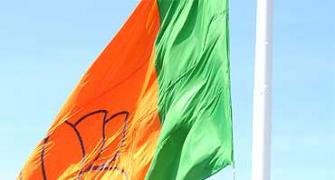 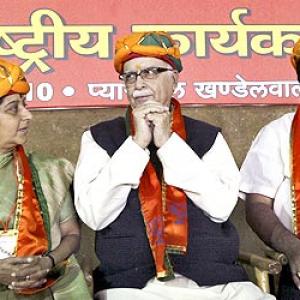 BJP goes all out to woo Dalits at national meet