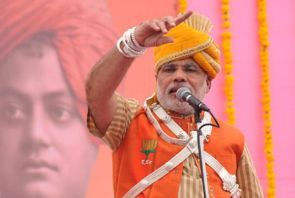 Attacking Narendra Modi, Bharatiya Janata Party leader L K Advani's close associate Sudheendhra Kulkarni on asked as to how a leader who has "polarised" the society and even his party can run a stable and effective government at the centre.

"A socially polarising leader has polarised his own party. Can he run a smooth, stable and effective government at the Centre? THINK SERIOUSLY!" Kulkarni said on Twitter about Modi without naming him.

Though Advani is said to be opposed to Modi being declared BJP's Prime Ministerial candidate, he has not spoken out openly on the issue.

However, the timing of remarks made by Kulkarni, virtually considered Advani's alter ego, is significant and are seen as echoing the BJP leader's views amid attempts to bring him around on Modi issue.

"Elections are seven months away. People want a change. But who will provide the change? Leaders who are polarising the society?" Kulkarni told a news channel.

He maintained that there is no unanimity in the party about the prime ministerial candidate.

"Question does arise that can such a leader ensure a smooth government and peace in the society," he said.

BJP President Rajnath Singh and his predecessor Nitin Gadkari had visited Advani in the last two days to convince him on Modi's candidature but got no assurance from him.

Advani, Leader of the Opposition in Lok Sabha Sushma Swaraj and senior leader Murli Manohar Joshi are of the view that Modi's name should be declared after the Assembly elections to Madhya Pradesh, Chhattisgarh, Rajasthan and Delhi are over.

Modi's supporters, however, insist that the announcementbe made before September 17.