Days after a number of families were evicted from 'encroached land' in three districts of Assam, Chief Minister Himanta Biswa Sarma on Thursday urged the minority community to adopt a 'decent family planning policy' for population control to reduce poverty. 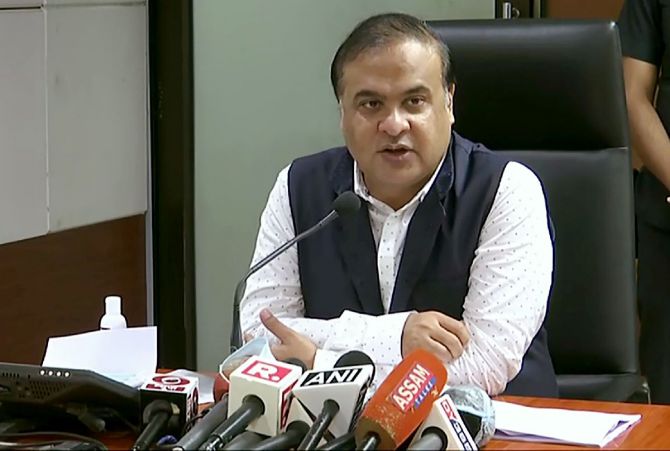 All stakeholders in the community must come forward and support the government in helping reduce poverty in the community which is primarily due to an unabated increase in population, Sarma said on the occasion of the completion of 30 days of his government.

According to the 2011 Census, Muslims comprise 34.22 per cent of Assam's total population of 3.12 crore and they are in majority in several districts. While Christians form 3.74 per cent of the total number of people in the state, the percentage of Sikhs, Buddhists and Jains is much less than one per cent.

Referring to the recent evictions from areas allegedly encroached by members of the minority community in three districts of the state, he said that the government cannot allow land encroachment in temples, 'sattras' (Vaishanavite institutions), forests or any other place with which sentiments of people are associated.

Land encroachment takes place when the living space shrinks with an increase in population, Sarma said.

Instead of 'criticising us for taking steps to free encroached land, various stakeholders and leaders of the community must do an introspection', he said.

Congress MP of Barpeta, Abdul Khaleque, on Wednesday tweeted that he urged Gauhati high court Chief Justice Sudhanshu Dhulia to take suo motu cognisance of the eviction drive, claiming that it was done in violation of a court order which said that any decree for eviction/dispossession or demolition should remain in abeyance considering the pandemic.

The chief minister said that his government is not against any community and is there for all people of the state.

"The government is the guardian of all poor people but need the support of the community in tackling the issue of population as it is the root cause of poverty, illiteracy and consequent lack of proper family planning," he said.

Sarma said that his government will work towards educating the women of the community so that the problem can be tackled effectively.

The community leaders and elected representatives have also assured the government that they do not want encroachment of temple, sattras, and forest lands, he said.

The chief minister urged the community leaders to encourage population control among the members and the government will take necessary steps in this regard.

Sarma said that after assuming office last month, he had directed the police to launch a crackdown on drugs and cattle smuggling and adopt a 'zero-tolerance policy' in this regard.

"I am not completely satisfied but during the last one month nearly Rs 24 crore worth of different types of drugs have been seized and 500 people have been arrested in this connection," he said.

This battle against drugs will continue 'till we completely stop transit and consumption of drugs in the state', he added.

Sarma said that seven forensic laboratories will be set up for testing the samples to speed up the trial process and in the next budget, more allocation will be made for rehabilitation centres.

The state serves as a transit for cattle smuggling and legally one cannot do much to stop it. So it has been decided
to enact a law by which transit of cattle through the state will be made illegal, Sarma said.

The chief minister said that though 30 days is not a yardstick to measure the success or the failure of a government, but morning shows the day.

"For the next six months, we will not focus on bringing reforms in education, health, social welfare and fundamental reforms of governance. We will act and not speak or debate unnecessarily," he said.

Sarma also listed highlights of his government's 'achievements' during the past 30 days.

They include tackling the second wave of COVID-19 effectively, increasing the states share in Numaligarh Refinery Limited to 26 per cent from 12.5 per cent, providing additional land to the Batadrava Than Cultural and Tourism project at the birthplace of Vaishnav saint Srimanta Sankardeva and hiking the daily wage of tea garden workers by Rs 38.

Sarma, along with 13 ministers, had taken the oath of office on May 10 after the BJP and its allies -- the Asom Gana Parishad and
the United People's Party Liberal -- won 75 of the 126 seats in the assembly polls.