Adityanath's last chance to prove himself?

The BJP's losses in Rajasthan, Madhya Pradesh and Chhattisgarh, where the UP CM had addressed nearly 75 rallies, has put a big question mark on his ability to deliver in high-octane contests, reports Virendra Singh Rawat. 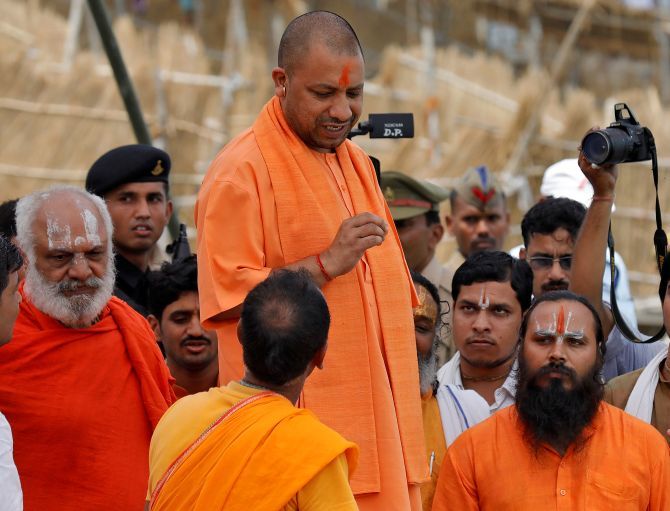 In the run-up to the Uttar Pradesh assembly polls in 2017, which subsequently morphed into a triangular contest between the Congress-Samajwadi Party combine, the Bahujan Samaj Party and the Bharatiya Janata Party, speculation was rife about then Gorakhpur MP Yogi Adityanath, lobbying for tickets for his candidates in about a dozen constituencies in eastern UP, or Purvanchal.

It was no secret that Adityanath and his supporters, predominantly comprising the influential Hindu Yuva Vahini, a self-acclaimed social and cultural organisation founded by him, were at the same time peeved at the BJP not projecting him as the party’s chief ministerial candidate.

Adityanath, who is also the presiding seer of the powerful Gorakshnath Peeth monastic order, had been acknowledged to have wielded influence over 12 eastern UP districts, including Deoria, Basti, Sant Kabir Nagar, Maharajganj, Sant Kabir Nagar and Siddharth Nagar.

As things turned out, the BJP and allies, riding on the euphemistic “Modi wave” and aided by the division of votes, went on to score a stupendous victory at the hustings, winning 325 of the 403 seats. Adityanath, on the basis of preference of the party’s elected legislators, was anointed the 21st chief minister of the country’s most populous state.

The firebrand Hindutva leader, who had shared rather bitter-sweet relations with the BJP owing to his larger-than-life image in eastern UP pockets, was suddenly entrusted with an expansive canvas to govern and also extend the party’s base in the state.

Now having completed two years as chief minister, the report card of Adityanath is at best a mixed one. Even as the saffron party won 14 of the 16 urban local bodies mayoral posts in December 2017, the BJP suffered defeats in all the three parliamentary and one assembly by-polls held last year, including his own turf of Gorakhpur.

While Adityanath prefers to discount these defeats by noting they did not alter the constitution of his government, the fact that the ruling party lost these by-polls with Adityanath at the helm had put a big question mark on his ability to deliver in high-octane contests.

In this backdrop, the Lok Sabha polls are an acid test for Adityanath to prove his merit as a political leader, possessing the capacity to deliver beyond his traditional pocket boroughs of Gorakhpur and adjoining districts. The coming together of the SP and BSP just ahead of the crucial elections has made the path tougher for Adityanath, considering these two opposition parties represent 42 per cent of the vote in the state.

Interestingly, the “trial by fire” for him becomes even tougher since he is up against the charm offensive of the Congress general secretary in charge of eastern UP, Priyanka Gandhi, who had recently led an impressive road show in Lucknow, alongside his brother and party president, Rahul Gandhi.

Political commentator Sharat Pradhan said there was more hype around the personality of Adityanath than what was real. “He has been touring other states for campaigning, but hasn’t done any magic so far.”

The BJP faced poll reverses in Hindi heartland states of Rajasthan, Madhya Pradesh and Chhattisgarh, where Adityanath had addressed nearly 75 rallies, even as the opposition criticised him for allegedly neglecting UP while electioneering in other states.

Further, Pradhan said the phenomenon of stray cattle destroying crops in rural areas would hit the poll prospects of the BJP. “There is a strong undercurrent of anger among farmers, especially small agriculturists, since their livelihood is getting affected due to the menace of ever-increasing stray cattle.”

In contrast, Adityanath has been religiously talking about the successful holding of the UP Investors Summit 2018 and Kumbh in Prayagraj in 2019.

Nonetheless, the Opposition has been sharpening attacks on his government over rising crime, including crime against women. A senior Congress leader slammed the government for functioning like an “event management company” and trying to conceal its failures.

The accusation of graft and impropriety against the personal secretaries of three UP ministers, caught in a sting operation by a news channel in December last year, had put the state government in the dock.

However, a large section of BJP supporters in UP and outside reckon Adityanath the rightful successor to BJP mascot Narendra Modi owing to their identical persona of propriety and austere lifestyle.