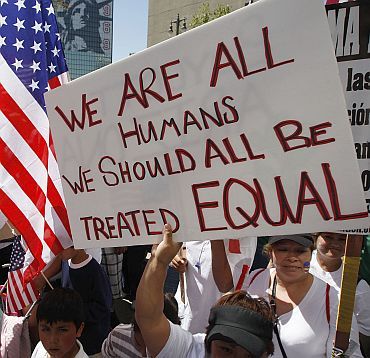 An advertisement stating "no Indians or Asians" for flatmates in New Zealand's biggest online marketplace, sparked an outrage among the Indian community which said such "explicit discrimination" was concerning.

The ad on TradeMe, New Zealand's biggest online marketplace, by a man from Christchurch city who goes by the name Alistair was listed a week ago, and has been viewed hundreds of times.

The man who listed the ad, which has been removed now, insisted that he was not racist "but did not want to live with people who cook curry every night or couldn't speak English", the New Zealand Herald reported.

The honest answer is that the majority of them either don't speak English very well, and I've had problems with communication in the past, where I've tried to tell them that they're doing something wrong and they don't understand," Alistair was quoted as saying by the daily.

"The other thing is, the Indians in particular are quite arrogant...I don't want to get people turning up and not being able to speak English, or people who cook curry every night. I don't want to come home to a house that smells..." he said.

The advertisement sparked an outrage among the Indian community in New Zealand. "It's shocking to hear about this ad," NZ Indian Central Association president Harshadbhai Patel said.

It's not on. And we should not encourage these kinds of advertisements, especially targeting Asians and Indians," he said.

Patel said people were free to decide who they wanted to live with, but such explicit discrimination was concerning. "It's disappointing that it happens in a country like New Zealand," he said.

Patel said ads of this nature were rare in New Zealand, but had the potential to damage race relations. He said he would raise the ad at the association's executive committee meeting in Wellington on November 10.

The ad was removed shortly after it triggered an outrage. A spokesman TradeMe said, "On the face of it, it sounds like this would have crossed the line."

"If anyone has concerns about a listing we encourage them to hit the Community watch button so our team can take a look," the spokesman said. He said TradeMe would consider its legal position, based on the Human Rights Act, but would also "make a call based on the TradeMe community's reaction."