Families of victims of extra-judicial killings in Manipur expect a favourable judgment from the apex court. Geetanjali Krishna reports. 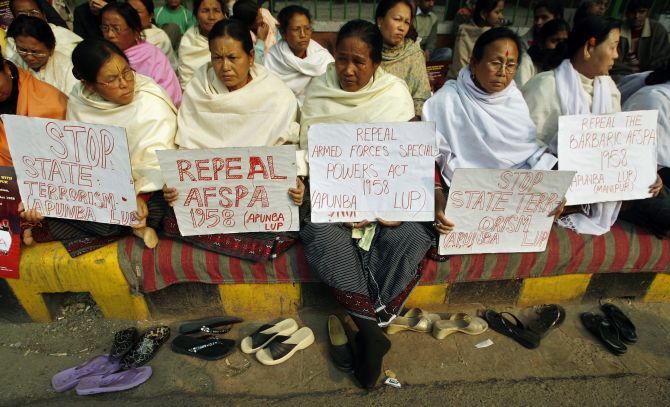 At the Cheirap Court Complex, Imphal (West), a group of people stand, waiting for their turn. They are families of some of the 1,528 victims of extra-judicial killings in Manipur in the last 30 years.

Since July 2016, in accordance with the directive of the Supreme Court after a writ petition filed by Manipur non-government organisations Human Rights Alert and Extra Judicial Execution Victims Families’ Association -- the overworked staff of the two NGOs has been documenting each case and registering the testimonies of victim families. The work is gruelling and emotionally intense, but the comprehensive picture emerging from the 500-odd cases documented so far is chilling.

Almost all the families interviewed so far claim to know the perpetrator of the killing, or at least the government agency involved. The question on the minds of the people of Manipur, who have been under the fear of what activists refer to as the ‘draconian and undemocratic’ Armed Forces (Special Protection) Act of 1958, is this. What will happen when all this data is presented to the Supreme Court by its deadline on September 7?

"We are hopeful now that the Supreme Court has taken such a hard stance on AFSPA,” says Babloo Loitongbam of Human Rights Alert.

Surrounded by piles of forms being filled out for victim families by student volunteers and staff, Loitongbam explains the gargantuan task at hand. “We haven’t been able to reach some of the more remote areas that have been cut off by the rains,” he says. “Even in the areas we have been able to reach, the culture of fear is such that some families have been reluctant to even register cases with us…”

Money is tight as well, and the two NGOs are surviving on funds contributed by the families of the 28 victims who have recently been awarded Rs 5.5 lakh each in compensation. “The best remuneration we can get is a favourable judgment from the Supreme Court,” says Pragya Shah, a young lawyer who’s just completed a month of volunteering in Imphal.

Meanwhile, a parallel strand has been developing in the campaign against AFSPA since January 2016. Herojit Singh, a head constable of Manipur Police, submitted a detailed confession to the court about having carried out around 120 extra-judicial killings in the state. Already indicted in the flagrantly public 2009 killing of Chungkham Sanjit, a suspected militant, Singh has testified that he was simply following orders of his superior officers.

1,528
extra-judicial killings in Manipur between 1979 and 2012, according to a writ petition filed by EEVFAM and The Human Rights Alert in the Supreme Court.

Singh, now addicted to heroin and very ill, is hell bent on making his testimony count, one way or the other. But, human rights activists in the state aren’t very surprised that his confession hasn’t caused the upheaval it should have -- for it not only exposes the quality of governance of a state which has imposed a law meant for emergencies for the past 58 years, it has also exposed the fact that human rights violations in Manipur have occurred with the active knowledge of the state.

At Imphal’s Jawaharlal Nehru Institute of Medical Sciences, human rights activist and the world’s longest hunger striker Irom Sharmila is also readying herself to re-strategise her protest against AFSPA.

“I can’t always remain the poster woman of this campaign,” she says. “It is now important for everyone to participate in it.” As she plans to visit all the districts of Manipur to build such a campaign, she reiterates the importance of building opinion from the bottom up. “What we need,” she says, “is a widespread campaign against this law.”

Much depends now on how the Supreme Court rules on September 7 after Loitongbam and EEVFAM submit these case reports. “The SC has simply directed that all these cases be probed, but we’re advocating that they must all be the subject of criminal investigation,” says Loitingbam.

They are also demanding the provision of adequate reparation to all victim families and the removal of AFSPA, which has so far allowed the army and police to violate human rights with impunity.

Manipur seems to be caught in a vicious circle in which the State cannibalises its own citizens under the umbrella of AFSPA, and the resultant disenchantment enables militancy to take a stronger hold in Manipur, which in turn defeats the law’s very purpose.

The problems run too deep, and the schisms too wide, for any immediate solution to the state’s problems. But, the events of the past few months make reason for cautious optimism that perhaps things are finally moving in the right direction.

AFSPA in a nutshell