The Gujarat Anti Terrorist Squad on Saturday took activist Teesta Setalvad in custody from Mumbai in connection with an FIR registered against her at the Ahmedabad city crime branch, sources said. 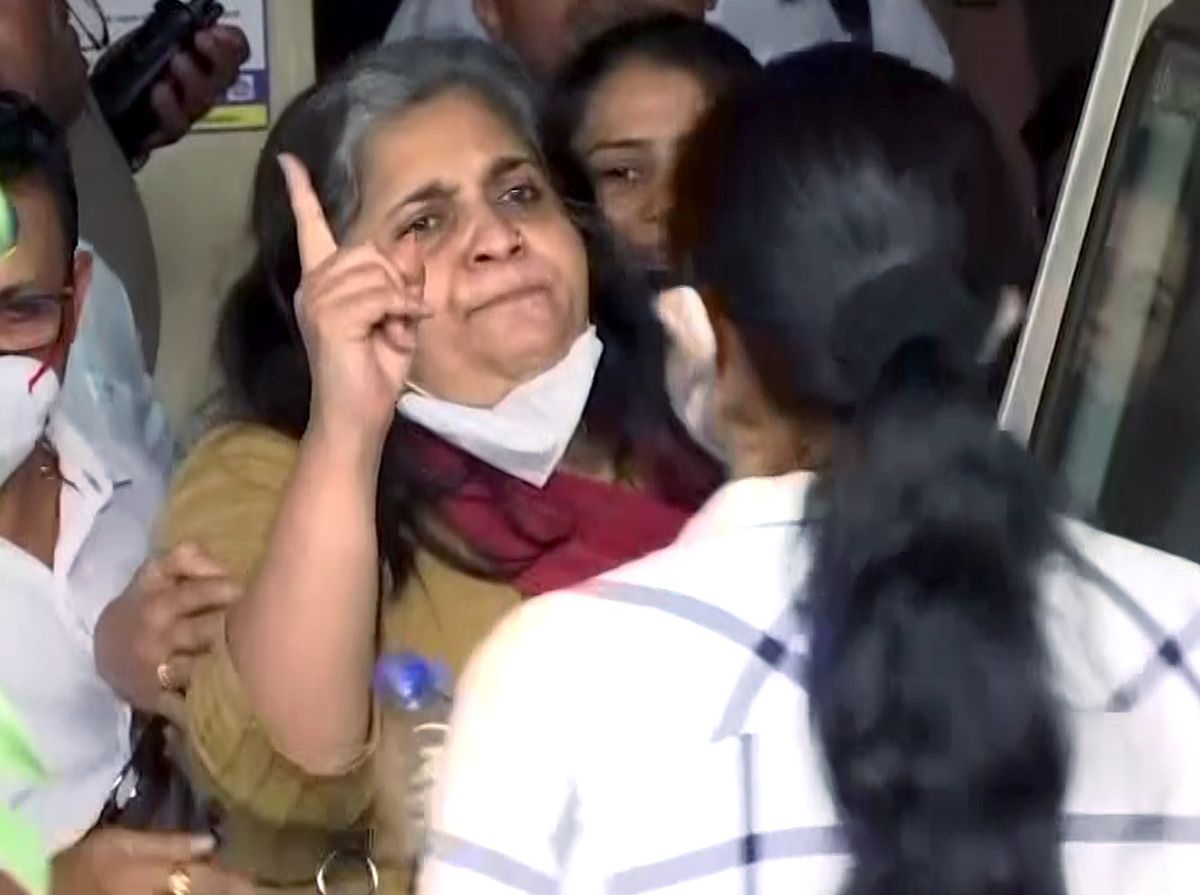 Setalvad, on her part, lodged a complaint with Santacruz police station in Mumbai claiming that the "arrest" was illegal and she apprehended a threat to her life.

She was being taken to Ahmedabad, sources said.

The First Information Report, registered earlier in the day, accused her and former IPS officers R B Sreekumar and Sanjiv Bhatt of forgery and criminal conspiracy to falsely implicate "innocent" people in the 2002 Gujarat riots cases.

A day earlier, the Supreme Court had dismissed a petition challenging the clean chit given by the SIT to then Gujarat chief minister Narendra Modi and others in the 2002 post-Godhra riots cases.

Incidentally, the action came hours after Union Minister Amit Shah in an interview said that Teesta Setalvad-run NGO gave baseless information about the 2002 Gujarat riots to the police.

"I have read the judgement very carefully. The judgement clearly mentions the name of Teesta Setalvad. The NGO that was run being run by her - I don't remember the name of the NGO- had given baseless information about the riots to the police," Amit Shah said.

Setalvad's NGO had supported Zakia Jafri, who had filed the petition alleging a larger conspiracy behind the riots, throughout her legal battle. Jafri's husband and former Congress MP Ehsan Jafri was killed during the riots.

A police officer in Mumbai said Ahmedabad police detained Setalvad from her residence in Juhu and took her with them after intimating local police.

"She also gave a written complaint to Santacruz police station (when she was taken there) and they are processing it," said the official.

Setalvad's complaint alleged that Gujarat police "barged into" her compound, did not show her a copy of the FIR or warrant against her, and there was a "big bruise" on her left hand.

"I fear seriously for my life," her complaint added.

Bringing the curtains down on the bid to reopen the probe into the 2002 riots, a Supreme Court bench headed by Justice A M Khanwilkar on Friday had also spoken of “the devious stratagem to keep the pot boiling, obviously, for ulterior design”, and said disgruntled officers of the Gujarat government need to be in the dock and proceeded with in accordance with law for creating a sensation by making false revelations.

The complaint filed by Ahmedabad crime branch's inspector D B Barad, on which the FIR is based, accused Setalvad, Bhatt and Sreekumar of having conspired "to abuse the process of law by fabricating false evidence to make several persons to be convicted in an offence that is punishable with capital punishment."

They instituted "false and malicious criminal proceedings against innocent people with intention to cause injury to several persons," the complaint alleged.

The FIR was registered under sections 468, 471 (forgery), 194 (giving or fabricating false evidence with intent to procure conviction of capital offence), 211 (institute criminal proceedings to cause injury), 218 (public servant framing incorrect record or writing with intent to save person from punishment or property from forfeiture), and 120 (B) (criminal conspiracy) of the Indian Penal Code.

"Setalvad conjured, concocted, forged, fabricated facts and documents and/or evidence including fabrication of documents by persons who were protective witnesses of the complainant (Zakia)," as per the complaint.

Setalvad was also accused of influencing and tutoring witnesses and making them sign pre-typed affidavits. Even Zakia Jafri was tutored by Setalvad, as is clear from her statement before the Nanavati Commission on August 22, 2003, the complaint said.

IPS officers Sanjeev Bhatt and RB Sreekumar had made several depositions before the Nanavati Commission of Inquiry that were against the Gujarat government, the complaint said.

Bhatt allegedly forged various documents mailed to the SIT and also falsely claimed he attended a late night meeting on February 27, 2002 called by the then Chief Minister (Modi) at his residence, it said.
Bhatt is currently lodged in jail in another case.

"Investigation conducted by SIT conclusively established that Bhatt was not present in the said meeting, and he had made the above stated claims nine years after the incident to falsely implicate various persons in grave sections of law," said the complaint.

Sreekumar's nine affidavits before the Nanavati-Shah Commission was the source for much of the allegations in Zakia Jafri's petition, it said.

He was additional DGP of the Armed Unit at the time of riots, but his statement before SIT revealed that his information of the facts was acquired after he was posted as ADG (intelligence) on April 9, 2002, it said.

"He did not make any allegation against the government in initial two affidavits, did so only in the third affidavit. He has done these acts and many others deliberately to falsely implicate certain persons in grave sections of law," it said.