Civic bodies in Ahmedabad, Bhavnagar and Rajkot cities of Gujarat on Tuesday said they were taking action against street-side handcarts irrespective of whether they sold vegetarian or non-vegetarian foods. 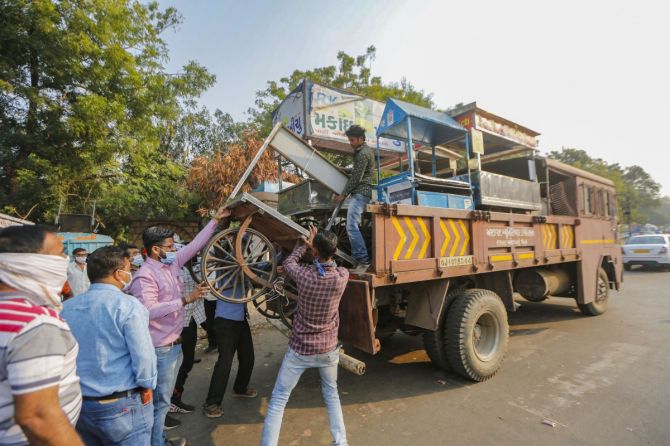 After a controversy arose over some civic bodies' plans to act against handcarts selling non-veg foods on main thoroughfares, Chief Minister Bhupendra Patel on Monday had said the state government has no problem with people's food choices.

The Ahmedabad Municipal Corporation on Tuesday launched an anti-encroachment drive from Vastrapur Lake area, a busy street-food hub which bustles with customers from evening till late at night.

"AMC officials have launched a drive to remove street vendors who are obstructing traffic and people's movement. It covers vendors of both veg and non-veg food. There is no discrimination. We will take action against everyone who blocks roads," said Devang Dani, chairman of  the AMC's town planning and estate committee.

Assistant Municipal Commissioner of the New West Zone Hardik Thakor said several street carts which obstructed traffic were removed from the area. "Not just non-veg, we have removed handcarts selling vegetarian foods too," he added.

Corporators and local leaders of Asaduddin Owaisi's All India Majlis-e-Ittehadul Muslimeen staged a protest at the AMC's headquarters and demanded the poor should not be harassed and the drive be stopped.

On Monday, Dani had announced that the stalls and carts selling non-veg foods including egg dishes along the major roads and in 100-metre radius from schools, colleges, gardens and religious places will be removed.

But on Tuesday he clarified that veg food vendors too will face action.

Chief minister Patel had clarified on Monday that the state government had no issue with anybody's food habits, but action can be taken against those selling unhygienic items or obstructing traffic.

Last week, five out of eight BJP-ruled municipal corporations in Gujarat -- Ahmedabad, Bhavnagar, Rajkot, Junagadh and Vadodara -- had announced that they will take action against vendors selling non-veg foods on busy roads.

While there was no such announcement by Gandhinagar and Surat urban bodies, Jamnagar mayor Binaben Kothari invited suggestions from corporators on the issue.

Rajkot mayor Pradip Dav was the first to announce that vendors of non-veg foods including egg dishes will be removed from the main roads to decongest the roads.

People also complained about the presence of non-veg food vendors near religious places, he said.

Following his announcement, a drive was launched in Rajkot a few days ago and vendors encroaching on all main roads and public places such as Race Course Ring Road, Shastri Maidan Road and Phulchab Chowk were removed, said an official.

"The rule is for everyone who obstructs traffic or encroaches at a public place. The hawkers of both veg and non-veg foods can do their business in designated hawker zones. There is no specific order to take action against non-veg vendors," Rajkot Municipal Commissioner Amit Arora said on Tuesday.

In Bhavnagar, an order was passed by the civic body on November 12 to remove handcarts selling non-veg foods from public roads and from places where they could `hurt religious sentiments'.

Several such handcarts were seized by the municipal corporation, said an official.

The standing committee of the Junagadh Municipal Corporation also issued a similar order on November 12, but no action has been initiated so far in the city even as several handcart owners staged a protest at the corporation's headquarters on Tuesday.

In Vadodara, the municipal body asked vendors to cover their merchandise and maintain hygiene. Hitendra Patel, chairman of the Vadodara Municipal Corporation's standing committee, said there was no discrimination between vendors selling veg and non-veg food items.

"I had only said that vendors must take permission from the corporation and should not create obstruction to traffic. Vendors have started covering food items now. We will remove the handcarts selling both veg and non-veg food if they are obstructing people's movement," he said.