The Centre on Thursday told the Supreme Court that being a constitutionally elected government it is acting responsibly to alleviate the suffering of people due to COVID-19 by making every possible effort to augment the supply of Oxygen. 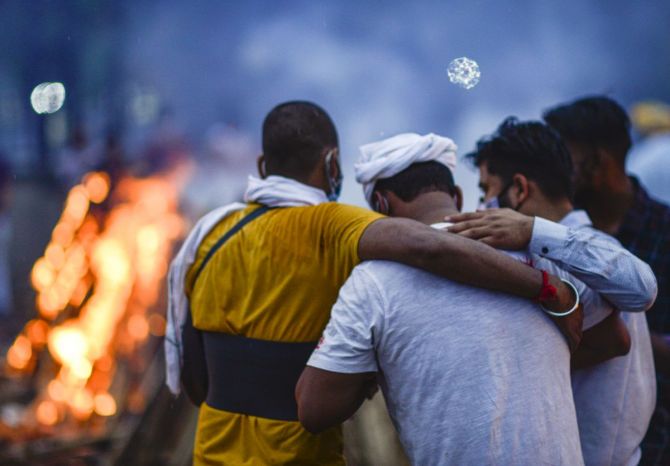 IMAGE: A relative reacts during cremation of a COVID-19 victim at the Old Seemapuri Cremation Ground in New Delhi, on Thursday. Photograph: Ravi Choudhary/PTI Photo

It rebutted the Delhi government's accusation that oxygen allocation is being done arbitrarily and favoured creation of an effective mechanism to deal with allocation and distribution of Oxygen to the states.

The apex court was told that the Delhi government has made it a 'Centre versus Delhi fight'.

A bench of Justices D Y Chandrachud and M R Shah was told by Solicitor General Tushar Mehta that the government has to look at the demands of all the States instead of only focussing on Delhi.

Mehta said, 'the central government is a constitutionally elected government for the whole country. So is Delhi government. I therefore expect the same sense of responsibility from GNCTD'.

He said, "We are concerned about the people and their suffering. We are taking every effort to augment the supply of Oxygen at the highest political level including imports from friendly countries. I will belittle myself and become small if I reply to the accusation being made by the Delhi government."

The solicitor general said, 'despite claiming the issue is not adversarial, they (Delhi government) have made it a Centre versus Delhi fight. We have to look at the demands of the whole country'.

He said that the Centre's current Oxygen allocation formula is not static but dynamic and it is not cast on a stone but it has been made after proper application of mind by the experts and realistic figures has been arrived at.

"We are concerned not only for the people of Delhi but for the entire country. I have never suggested that an audit of supply and demand of Oxygen be conducted in Delhi, as claimed by Delhi government's counsel.

"I have suggested an audit of supply and demand of Oxygen in the entire country so that effective mechanisms can be developed.

"They keep saying people are dying in Delhi. We are also equally concerned about the people of Delhi," he said.

Mehta said allocation of Oxygen to Mumbai cannot be compared to allocation of Maharashtra as done by Delhi government and shifting of blame should be avoided.

"It needs to be seen if Rs 100 is sent to the state then how much is spent. I have been saying this from day one that there has been a system failure.

"It does not mean that we are against any political leadership or any government. Delhi is not only the capital of the country but also the face of the country. It has special status," Mehta said.

He said that COVID-19 is a disaster, which the Centre is trying to manage and ensure equitable distribution of resources based on a rational formula.

"I cannot start nit-picking and score debating points. I just don't want people to suffer. My concern is to save lives," Mehta said, while replying to contentions of senior advocate Rahul Mehra, representing Delhi government.

During the day-long hearing, Mehra submitted that despite the top court's direction, Centre has failed to allocate requisite Oxygen to the state even on Thursday as per their estimate, a day after it had given 730MT.

He said that the Centre has tried to put the Delhi government in dock in every affidavit they have filed before the courts and claimed that other States like Madhya Pradesh and Punjab were given more Oxygen than their demands.

"This court should not allow the supply to be brought down as it will be in violation of the court's April 30 order and we must say that it is not followed in letter and spirit. This court should ensure that the supply is maintained at 700MT," Mehra said.

He said that people are dying in Delhi for shortage in supply of Oxygen to hospitals and the Centre should not be allowed to dilute the supply either directly or indirectly and the solemn assurance given by the union government to court that the demand of gas will be met shall be followed.

"If an audit of Oxygen supply is to be made, then it should be done on the allocation policy of the centre which in our view is arbitrary. The audit of tankers should also be done as these vehicles are national assets," he said, adding that there should also be no allocation on just papers.

"There should not be any presupposition that there is a certain government in the state and it is not doing its job. We are trying to do everything possible at our end," Mehra said, adding that if the allocation policy of the Centre is not arbitrary then there is nothing to hide. 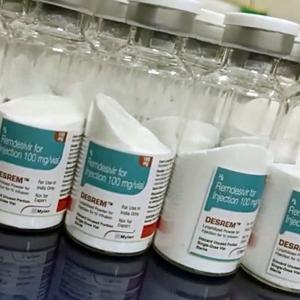